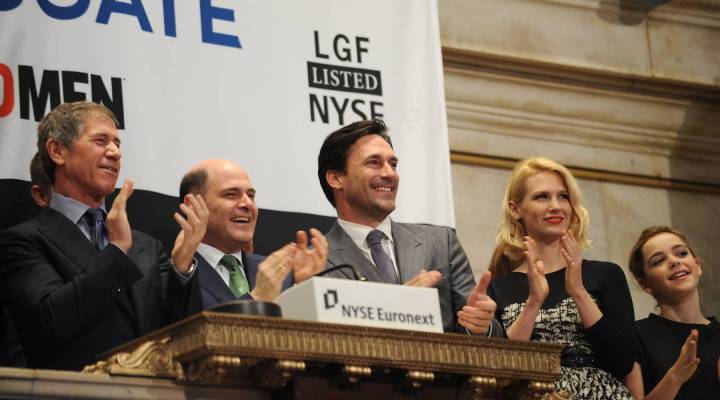 “Mad Men” returns for a fifth season Sunday. But who are the Don Drapers in today’s advertising industry and how has Madison Avenue changed? Here, the cast of the show ring the opening bell of the New York Stock Exchange March 21, 2012. STAN HONDA/AFP/Getty Images

“Mad Men” returns for a fifth season Sunday. But who are the Don Drapers in today’s advertising industry and how has Madison Avenue changed? Here, the cast of the show ring the opening bell of the New York Stock Exchange March 21, 2012. STAN HONDA/AFP/Getty Images

Kai Ryssdal: If you’re part of the cult of “Mad Men,” the rapture arrives this weekend. The series built around the advertising industry of the 1960s finally returns for a fifth season Sunday. Chain-smoking, womanizing, whisky-swilling Don Draper is still the hottest thing on Madison Avenue. But how would he do today?

We sent Marketplace’s Stacey Vanek Smith in search of the new icons of Madison Avenue.

Stacey Vanek Smith: Martini anyone? After all, Don Draper and Co. are almost never without a cocktail. But here at the bar in New York’s Alex Hotel, Rupal Parekh of Advertising Age says Draper would find today’s advertising industry sobering.

Rupal Parekh: I think if Don saw what the industry is like today, I don’t know that he would go into advertising. The pressure is far, far greater on ad execs to deliver real results.

The revolution of Don Draper’s day was television, but now advertisers are dealing with a 24/7 audience on an array of new media — Facebook, YouTube, mobile apps. And the results of those ads can often be measured immediately. So, Parekh says, today’s Don Drapers need a firm grasp of new technology. The line between tech company and ad agency is blurring.

Parekh: Without a doubt, it is cool to be a geek on Madison Avenue now.

In the last couple years, Facebook, Google and Yahoo have expanded their New York media and advertising offices. This year, online ad spending is expected to total nearly $40 billion, overtaking print for the first time and rapidly gaining ground on TV.

Torrence Boone is the managing director of Google’s internal advertising department. Google has been snapping up advertising awards and even created a Super Bowl spot.

Boone: Our role is almost like a translator or a liaison between Madison Avenue and all of the amazing things that we have internally at Google.

Coke advertisement: I’d like to buy the world a Coke and keep it company.

This 1971 Coke ad was developed by ad giant McCann Erickson. Google worked with the original art director to re-release the ad and used social media to give it a contemporary twist. Now you actually can buy the world a Coke, kind of. If you click on an online ad, you can send a free Coke to someone in a faraway city. The person can pick it at a specialized vending machine and record a thank you video, like this one from Cape Town.

Video: Thank you very much for the Coke that you gave me! I enjoy it and I appreciate it.

Boone says he hopes efforts like these will help advertisers see new possibilities for interactive ads.

Boone: By combining technology with creativity, we’ll get transformative advertising that is of a higher utility to consumers.

But even with all of the new possibilities for ads, some lessons from the old school still apply says Stewart Alter, executive vice president at McCann. Alter says the ability to create an emotional response to a product is more important than ever. He points to a well-known scene in “Mad Men” when Don Draper pitches his ad campaign for Kodak’s new slide projector.

“Mad Men” clip: It’s a time machine. It takes us to a place where we ache to go again.

Stewart Alter: The way he transforms what the product benefit is into this emotional benefit for buyers of the product — that’s what is most fundamental about advertising.

That emotional benefit is especially crucial in the age of social media says Matt Donovan, a managing partner at McCann.

Matt Donovan: I think the old “trying to sell things” is actually not what we’re focused on now.

Wait, advertisers are no longer focused on selling things? Donovan says, no. Instead, they’re focused on inspiring consumers enough that they sell things to each other, by “liking” a company on Facebook, tweeting about an ad campaign, or Yelping a review.

Donovan: I could see a world in 10 years, where people proactively take on the responsibility of creating branded content on behalf of their favorite brand or product that they’re passionate about.

For most of us, recommendations from friends are more powerful than an ad, says Horizon Media analyst Brad Adgate. He says social media has turned us all into little advertising megaphones.

Brad Adgate: It’s no longer a top down approach where the advertiser will send a message down to consumers. We all have bully pulpits and there’s more of a give and take.

Adgate says more and more, we are using our bully pulpits to promote products to our friends. So really, the new Don Draper… is you.