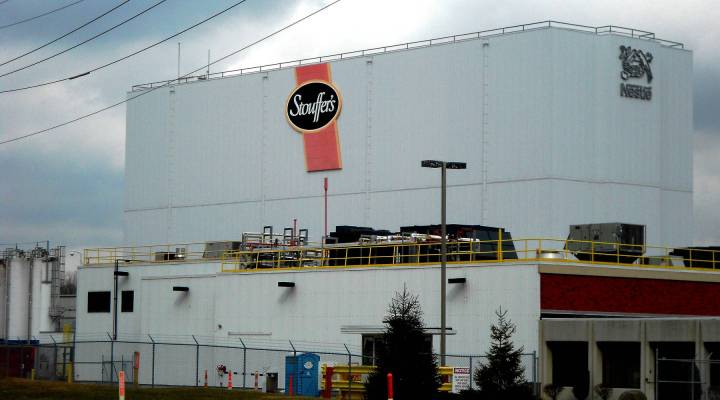 Manufacturing jobs up in Ohio

This towering white monolith in Solon, Ohio, is one gigantic freezer, that holds a week’s worth of production of frozen foods, under the Nestle and Stouffers brand. Brian Bull/WCPN Cleveland for Marketplace
The Real Economy

Manufacturing jobs up in Ohio

This towering white monolith in Solon, Ohio, is one gigantic freezer, that holds a week’s worth of production of frozen foods, under the Nestle and Stouffers brand. Brian Bull/WCPN Cleveland for Marketplace

Kai Ryssdal: This might be too grand a thing to say based on just one month’s worth of data, but it’s entirely possible the American automobile industry is back. February sales figures came out today. More cars were sold in this country last month than at any point since March 2008, practically an economic lifetime ago. With those sales, of course, come jobs — in manufacturing and related industries. For the next week or so jobs are all we’re likely to hear about from the GOP presidential candidates as we head into Super Tuesday. And that’s part of what our election coverage is about, The Real Economy.

Manufacturing in the Midwest is seeing a rebound, but some of the biggest job growth in some of the key swing states — like Ohio — isn’t coming from the Rust Belt staples of steel and cars.

Brian Bull: Mark Morton is a chef with Nestle USA. The company’s product development center is here in Solon, Ohio, and Morton’s hard at work in a test kitchen.

Mark Morton: These are some “soy shallots”, the starting point of the sauce. I’m going to carmelize them in just a little bit of oil in a hot pan here.

Morton’s experimenting with entrees that may soon end up in your grocer’s freezer.

Morton: Once these are brown, then I’ll add the celery and the carrots, and I’ll just continue to cook them until they soften.

Morton is one of more than 70,000 Ohioans working in the food processing industry.

Richard Linton chairs Ohio State University’s Department of Food Science and Technology. He says with more than seventeen hundred, Ohio leads all states in the number of food processing businesses.

Richard Linton: It helps our economy. It helps place jobs here in the state.

Linton expects the sector to add at least another 15,000 jobs in the next decade. Jobs, of course, are a major issue this election year. John Green heads the Bliss Institute of Applied Politics, at the University of Akron. He says Democrats and Republicans will fight to take credit for Ohio’s growing manufacturing sector.

John GreenPresident Obama’s arguments about stimulating the economy, about strategic investments in particular kinds of industries. And also the Republican arguments about lower taxes and decreasing the costs of government. All of those things potentially play with Ohio voters, because a lot of people in Ohio are concerned about the manufacturing sector.

It’s hard to quantify just how state and federal policies have affected Ohio’s fortunes. But one thing that’s helped is its location smack-dab in the middle of the Farm Belt. Bob Cohen teaches agriculture at Kent State University.

Bob Cohen: We see from Lake Erie down to the Ohio River, very diverse resources that enables everything from wine grapes and fruits in the north, to tobacco in the south, and beans and wheat in the west, and a lot of vegetables in between.

Ohio is also close to major markets in the Midwest and East Coast. Cohen says the processed food industry does well in tough times as consumers go out less and dine more at home.

Cohen: As the saying goes, you always gotta eat.

Yet despite the food industry’s resilience, there are casualties. J. Kolt is the executive vice-president of Chef-Ko, a meat distributor in Cleveland. He’s taken more than a dozen businesses off his client list over the past few years.

J. Kolt: There was a manufacturer in Warren, that couldn’t compete with Nestles in producing pocket sandwiches, a couple hot dog companies here in town… those businesses were either run out of business based on buying power and pricing by the big boys.

Proving that as important as the food industry is to Ohio, it’s not without its own “food chain” where the lake trout still feast on the minnows.