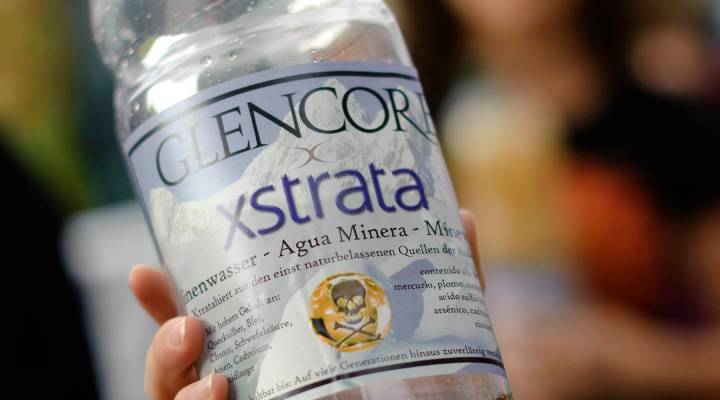 A women holds a bottle representing polluted drinking water in front of the headquarters of Swiss commodities and mining giant Glencore on Oct. 12, 2011 in Baar. The demonstrators protested against Glencore and Swiss mining group Xstrata against the environmental impact of their mining activities. FABRICE COFFRINI/AFP/Getty Images

A women holds a bottle representing polluted drinking water in front of the headquarters of Swiss commodities and mining giant Glencore on Oct. 12, 2011 in Baar. The demonstrators protested against Glencore and Swiss mining group Xstrata against the environmental impact of their mining activities. FABRICE COFFRINI/AFP/Getty Images

Kai Ryssdal: We start today with this: A can of soup. Campbell’s Tomato, to be precise.

Why, you ask? Because that can doesn’t just make itself, you know. And the tale of how the metal from which it’s made gets from the ground to your supermarket is the corporate story of the day.

Xstrata — it’s an Anglo-Swiss mining company — and Glencore, a major commodities trading company, announced a merger today. The resulting $90 billion conglomerate would be the largest producer of coal and zinc in the world, not to mention owning a pretty serious share of the global supply of copper and lead.

Which means that that soup can? The merged company will have pulled the ore out of the ground, refined it, sold and processed it and delivered it to Campbell’s. We sent Marketplace’s Stacey Vanek Smith off to find out what that’ll mean for you and me — and the can of soup.

Stacey Vanek Smith: Xstrata pulls stuff out of the ground, Glencore sells it. The combo would be a kind of soup to nuts commodity shop.

When you see a big merger like this, the fear is that they would consolidate too much supply. So the company could corner the market, jack up prices and, suddenly, no more dollar soup for you.

Rod Eggerts is a professor of economics at the Colorado School of Mines. He says lots of different companies could be affected.

Rod Eggerts: Buyers of the raw materials that is imput into a can. Many construction projects now which rely on steel, copper in wiring or communities building new highways or railroads.

And those costs have a funny way of trickling down to soup consumers. Still, before you run out to stockpile, Eggerts says even this giant probably isn’t big enough to have much control over prices. And, the companies say they can streamline and cut costs.

So maybe the soup I’m heating up, would get cheaper.