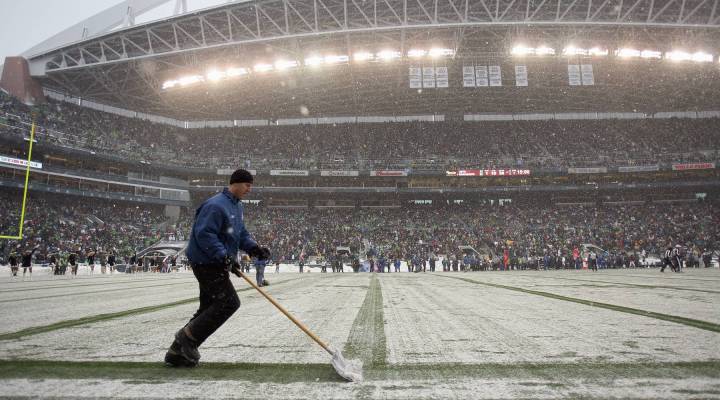 PODCAST: Super PACs, big recalls, and too many snow plows

COPY
A general view of a grounds keeper shoveling snow on the field during the game between the Seattle Seahawks and the New York Jets on December 21, 2008 at Qwest Field in Seattle, Wash. Otto Greule Jr/Getty Images
Mid-day Update

PODCAST: Super PACs, big recalls, and too many snow plows

A general view of a grounds keeper shoveling snow on the field during the game between the Seattle Seahawks and the New York Jets on December 21, 2008 at Qwest Field in Seattle, Wash. Otto Greule Jr/Getty Images
Listen Now

Drug company Pfizer has announced it’s recalling one million packs of birth control pills. The pills might not have enough contraceptive to prevent pregnancy.

Chrysler said this morning it made $183,000 dollars in profit last year — its first annual profit since 1997.

After the European Commission blocked the merger of the New York Stock Exchange and the German exchange Deutsche Boerse, turns out January was the best it’s been for the market in 15 years.

To the “You Just Can’t Win” department. The city of Seattle had a big snowstorm back in 2008. And the cleanup of all that snow was so bad, the head of the department of transportation lost her job. So the city revamped its snow plow operation. The Atlantic says Seattle might have too many snow plows. It’s just behind Chicago in its capacity to handle a blizzard — even though Chicago gets more than five times as much snow.

The world’s most expensive pigeon — a flying, cooing, racing pigeon. Any idea how much it’s worth? Correct answer is: $328,000. At least that’s what a Chinese shipping magnate paid to buy it. According to the Telegraph of London, pigeon racing is a fast growing sport in China. But lot of pigeon lovers aren’t happy by the price.