Adriene Hill:In less than a month, baseball starts spring training and Albert Pujols will start getting monster-sized checks from the L.A. Angels. The first-baseman recently signed a 10-year contract worth a quarter of a billion dollars. The question is whether it’s a good investment.

Marketplace’s Jeff Tyler runs the numbers for us.

Jeff Tyler: When the Angels invited fans to the stadium to welcome Albert Pujols to the team, John Kumar was there.

John Kumar: I took my children to the signing, to see Albert Pujols introduced. And we bought his new memorabilia that was on sale right there, his jerseys and his T-shirts.

T-shirts run $27; jerseys cost more than a $100. They’re flying off the shelves at the stadium store. Robert Alvarado is vice-president of marketing and ticket sales for the Angels.

Robert Alvarado: When you have 60 to 70 percent of your merchandise transactions that are Albert Pujols-related, that’s directly related to the signing.

He says season-ticket sales are up significantly since Pujols joined the team.

Sales of 20-game packages have risen 300 percent. Fans are paying the money to see Pujols deliver. And if he does, he’ll make more money. For example, he’ll earn $7 million if he breaks the all-time record for home runs. 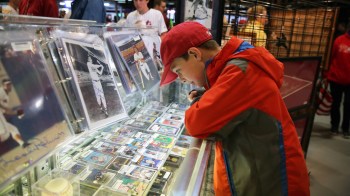