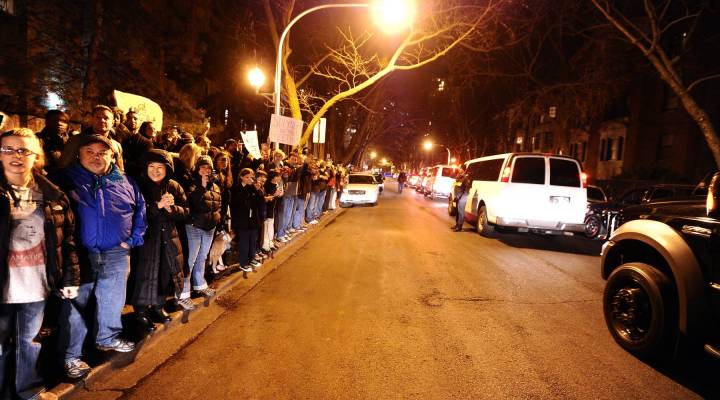 COPY
People crowd the sidewalk outside a house where US President Barack Obama stopped for a campaign event in Chicago, Ill., on January 11, 2012. JEWEL SAMAD/AFP/Getty Images
Mid-day Update

People crowd the sidewalk outside a house where US President Barack Obama stopped for a campaign event in Chicago, Ill., on January 11, 2012. JEWEL SAMAD/AFP/Getty Images
Listen Now

The government said this morning that retail sales inched up 0.1 percent last month. Which was enough to make 2011 the best year ever for retail sales.

Fixed mortgage rates fell once again to a record low, offering a great opportunity for those who can afford to buy or refinance homes. But few are able to take advantage of the rates.

U.S. business inventories rose 0.3 percent in November, reinforcing the view that fourth-quarter economic growth could get a boost as companies restock their shelves.

The economy is improving in every region of the country. That’s the latest word from the Fed’s Beige Book.

Coca-Cola says it alerted the Food and Drug Administration after it found some Brazilian growers had sprayed their orange trees with a fungicide that is not approved for use in the U.S. Orange juice is trading at near record levels this morning.

Royal Bank of Scotland said it’s going to cut 3,500 over the next three years in its investment division. That’s after the bank announced its top management team is entitled to millions of dollars in bonuses.

The Bank of England has kept its main interest rate at a record low. The European Central Bank left its key interest rate unchanged at one percent on Thursday as it plots its next steps in fighting the continent’s government debt crisis.

The number of U.S. homes that received a foreclosure filing fell to a four-year low in 2011 as a slowdown in processing hit the market, RealtyTrac said in a report on Thursday.

This morning we found out President Obama and the Democratic party raised $68 million toward the president’s re-election campaign in the last 3 months of 2011.

To the Food and Drug Administration, which is pulling some cups of Rip Rourin’ Crab Soup off store shelves. Not because there’s anything wrong with the Crab Soup — but because the ingredient list doesn’t let customers know that the crab soup has crab in it.

A couple of big oops moments for a Lafayette, La., man who’s charged with sticking up a convenience store. The man allegedly walked into the shop, grabbed a drink out of the cooler, pulled out a gun and demanded money. But when he went to drive away, ‘oops’, the thief realized he locked his keys in the getaway car. Which then leads us to the other oops moment. Police picked him up in a parking lot while waiting for a spare key from his mother.