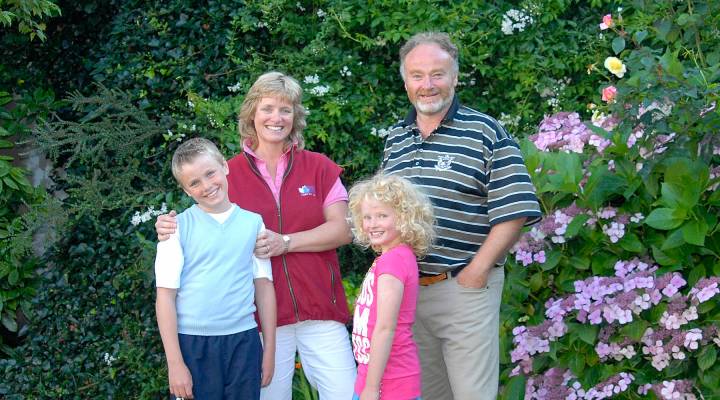 Penny and Brendan Fogarty with their children Andrew and Emma. They live in Dublin. Courtesy of the Forgarty family

Penny and Brendan Fogarty with their children Andrew and Emma. They live in Dublin. Courtesy of the Forgarty family

Tess Vigeland: So as I mentioned we’d have a closer look at those austerity measures being implemented in Europe. Why? Because if you think times are tight here, as of this week, Ireland is on its second round of belt-tightening. The Irish Tax Institute estimates monthly income in households with two wage earners has fallen by more than 600 Euros, or $800. The national sales tax will rise by two percentage points to 23 percent next year.

We’re joined now by Brendan and Penny Fogarty from their home in Dublin. Welcome.

Penny Fogarty: Thank you very much indeed. Good to talk to you.

Vigeland: Brendan, I understand that we’ve taken you away from a chore there at the house.

Penny: Correct. In Italian Renaissance style, let’s say, painting the roof of the Sistine Chapel. In other words, our bathroom.

Vigeland: Marvelous. Well, let’s start by hearing a little bit about the two of you. Brendan, you’re a photographer.

Vigeland: And Penny, you’re a doctor?

Penny: I am indeed, a family practitioner.

Vigeland: OK. Well, let’s get right to this. Describe for us what kind of changes you both made within your home following the first round of the austerity measures there in Ireland.

Penny: Probably the first thing we would say is us seeing the cautious types. We had the facility of buying our own cars without having necessarily to take out loans. You know, we would save enough and go, “Now we can invest.” But now we can’t save really to that extent.

Vigeland: Now can you explain for us why that is. What changed through those measures that made it more difficult for you in your household?

Penny: Well, I mean, our income would have gone down by at least 25 percent, I would imagine. There’s been cuts right, left and center, and so even with me, general practitioners, we have huge cuts imposed on us from the government and we took it like lambs. And then from Brendan’s side, construction industry just went very quiet.

Vigeland: Is it possible for you to take a look at this second round that is now coming and try to figure out how that is going to have an effect on you?

Brendan: The main features, there be it, child benefits or allowances, etc.

Vigeland: Just to explain to our audience, what you mean by the child benefits is that there are payments from the government to help you support your children as they’re growing up. And those have been cut back?

Brendan: They have been, yes. Won’t directly affect us. Few, in terms of child support has gone up, and most taxes have gone up. Health insurance is going up.

Vigeland: So what does that mean for you as you look at your own household budget? I mean, is that something you can plan for or are you looking at it and saying, “I don’t know what we’re going to do”?

Penny: In one way, we’re in a lucky scenario in that we have a reasonable expectation that my business, particularly, won’t suffer huge amounts more. I shouldn’t drop by yet another 25 percent.

But I think the first things we look at… We’ve never spent on ourselves or on holidays, etc., but the one thing we have always looked at is opportunities for the children. So, I’m afraid they’re the first target — you know, membership of sailing clubs and lessons that way. All these sort of things, it’ll be cutting back all the time and saying, “Sorry kids.”

Vigeland: Have the kids asked you any questions about all this?

Penny: I think probably they mention the recession every day. And so, “Look, I know it’s recession, but can I have…?” So they’re certainly well aware of it.

Vigeland: You know, Ireland at this point is the only European country that is now heading into a second round of austerity measures. I wonder how you feel looking out to the rest of Europe. Do you wonder why everybody else isn’t feeling the pain?

Brendan: Quietly, there’s no question about that. The U.K. has been struggling for quite some time. France and Germany now are definitely tightening the budget. But they’re big tough guys; we’re a relatively small country. Don’t have the bargaining power that these guys do have. Ireland is sort of putting the hand up, trying to get in early. Saying, “Look, we’re trying to meet our debts, we’re trying to meet our re-payments,” even more so, these cutbacks. So in the sense that we’re leaders in that respect, we’re hoping that it will put pay to some of the serious pressures that some of the bigger lobbying groups will be applying to us.

Penny: I think initially the first round we were obviously one of the first countries to go with the begging plate and say, “Please, we need help.” And when we looked at it, I think we’re still reeling in a shock. But now, when we’re becoming more and more exposed to what’s happening in the eurozone and we’re seeing that actually it wasn’t just Ireland and everybody had this false bubble, you start thinking, Well, why is that people who are in worse scenarios — particularly Greece — are marching, and we’re still going and saying, “Yes, sir,” “No, sir,” “Three bags full, sir,” “Very sorry sir,” “Please, can we have some more sir.”

Now I don’t think we’d ever have the sort of civil unrest that everywhere else has. I think we still have lost a lot of faith, I suppose, in our politicians and people are still very stressed that there’s huge amounts of gloom and doom and despair and despondency.

Vigeland: Penny, you mentioned this notion of gloom settling in. I wonder given your job as a family practitioner how you’re seeing that play out, perhaps, with your patients.

Penny: I would have to say that my prescribing rate of anti-depressants and anti-anxiety medications have gone even higher. You can see that there are a lot of young people who have overstretched themselves, etc. But it’s the elderly in particular who are the vulnerable in society. They have lost everything. They’re coming up to a time where austerity measures are coming in even more, they’re looking at public nursing homes being closed and they have huge fear for how they’re going to be cared for in the future. They have no security, whereas at least for those of us that are younger can feel “Well, OK we might have to work longer, but we’re still capable of working and earning a little bit more out of this.”

Vigeland: Well, Penny and Brendan Fogarty thank you so much for joining us. Really appreciate it.

Penny: Well, thank you very much and good luck to all of you as well.

Brendan: Many thanks indeed for your call and hope you’ll be able to throw some European light onto our good friends in North America.