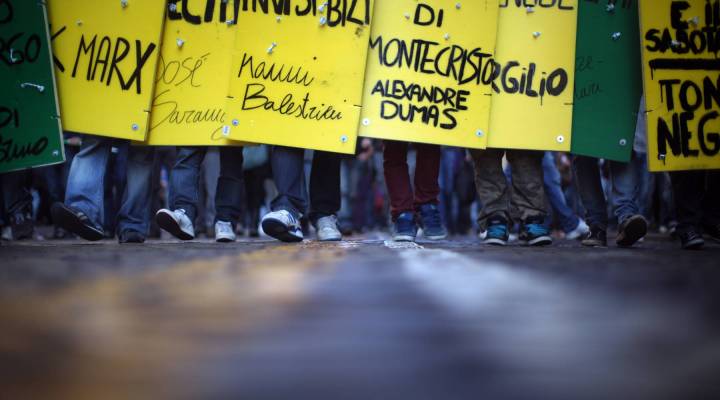 COPY
Young Italian students take part in a protest against austerity cuts and lack of jobs on November 17, 2011 in Naples, Italy. It looks like the cuts will have a chance of going through. Christopher Furlong/Getty Images
Mid-day Update

Young Italian students take part in a protest against austerity cuts and lack of jobs on November 17, 2011 in Naples, Italy. It looks like the cuts will have a chance of going through. Christopher Furlong/Getty Images
Listen Now

Online shopping in the week after thanksgiving. According to ComScore, U.S. consumers spent $6 billion online last week. Thanks in no small part to free shipping, which is being offered 63 percent of the time this year, compared with just 52 percent last year.

In today’s Mid-day Extra, we look at the most-visited malls in the country, and whether they are still relevant with all this online shopping taking over.

For the person with everything, the perfect holiday gift. A water-powered jet pact that’ll zoom you up to 30 feet above water and allow you to float at thrilling speeds of around 5 mph. The inventor, a Florida guy named Raymond Li, said he’s been wanting one since he saw one as a kid in a James Bond movie. The jet pack runs about $100,000. But that’s the basic model. Flashier paint runs an extra $3500.

To the U.K., where an 11-year-old boy lost his pet chicken Ginger. And after scouring the neighborhood for it, his mom turned to Twitter. Well according to the Northampton Chronicle and Echo, her plea for help was re-tweeted by a user in the U.S. And the chicken was found — Across the street.

New orders for U.S. factory goods fell in October for the second straight month, which could signal a slowdown in the manufacturing sector.