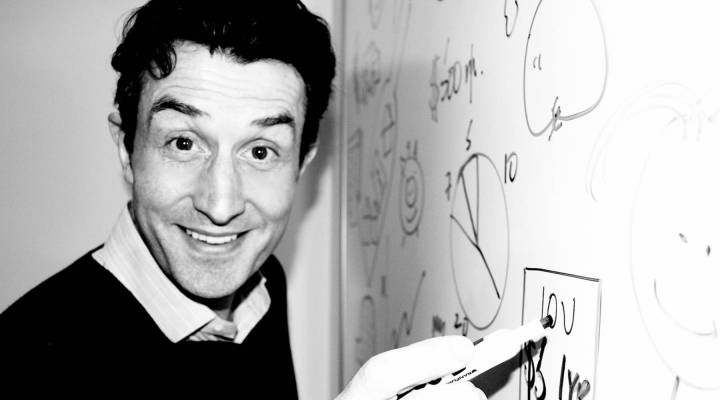 Tess Vigeland: And before we leave the topic of your letters, we wanted to get to some of them that have been about the show over the last couple of weeks. But before we do that, I wanted to sound the horns and perhaps roll the applause…

Vigeland: So before we kind of launch into all the massive changes you’re going to be making to this show…

Hirsch: I wouldn’t brace yourself too much for that. Small changes, baby steps.

Vigeland: We were talking earlier in the show about military folks returning from service and having a tough time finding jobs and this is something that you could relate to.

Hirsch: Yeah, so I was an officer in the Royal Marines for eight years. And when I left corps, which was in 1995, in the U.K. there were no jobs. Certainly not in news, which was what I wanted to do. I had to think very creatively about how I was gonna get a job — and I actually had to leave the country. I actually ended up going to Hong Kong; that was the only way I could find work, where people would employ me.

Vigeland: And how did the Royal Marines prepare you to be Marketplace Money’s senior producer?

Hirsch: You know, there’s a lot of kind of wrangling of difficult personalities to be done.

Vigeland: We actually asked some of our friends on Facebook what they would perhaps like to know about your or about your new tenure on this show. So first of all, I wanted to thank Wendy Reich for saying that this was the best show around.

Vigeland: Amen brotha. Elliott Gonzalez wanted to mention that he loves your Whiteboards, which is, of course, your big claim to fame here at Marketplace.

Vigeland: OK, fantastic. And Shannon Olkers says, “Dear Mr. Hirsch, how are you going to integrate personal finance into Marketplace without losing the depth of reporting and insight I’ve come to expect from the program. I’d hate the show devolve into money makeovers.” Hm…

Hirsch: Sounds like someone was reading the press release.

Hirsch: Yeah, and one of the things we found out when we did a bunch of audience research, audiences actually want a lot more personal finance during the week. Now, that doesn’t mean we’re going to have all these money makeovers; that’s the last thing we want to do. But you know, a lot of stories that we often cover from a corporate perspective, can be covered from a personal finance perspective. Take for example, the Bank of America credit card fee story, which we sort of looked at from a corporate perspective. But actually, that’s a consumer story too.

Vigeland: Which we know on this show very well.

Hirsch: Indeed. So why not during the week answer the question, how do you deal with those fees? How do you avoid them? How do you make sure you don’t get trapped by the other fees they’re charging? Very personal finance, I think.

Hirsch: Absolutely. One of the things that we find just by listening to our own shows over the last couple of years is that we could do a lot more to address some of the personal finance issues that different ethnic groups and minority communities have in this country. And I think that we want to spend a lot more time doing that. So I think I would like to hear from listeners about that if they have any ideas. But please keep your ears open for that kind of programming, because that’s the kind of thing that we wanna be doing.

Vigeland: That’s right. All right, so we love getting these kinds of questions about the show, about why we do what we do, how we do what we do, so feel free to post those on Facebook or on Twitter, you can follow Paddy @paddyhirsch or me at @radiotess.

And before we go, I wanted to just clarify one thing from a story we had on last weekend. We had Carmen Wong Ulrich talking about credit cards, and we had someone on Twitter ask about a statistic that she cited. She said that 80 percent if credit card users do not carry a balance. She says what she meant to say was that the 80 percent don’t have a problem with a credit card debt. And that is actually backed up by a couple of statistics: CreditCards.com says about 40 percent of credit card holders carry a balance of less than $1,000. That’s pretty good. Of course, we don’t want you to carry a balance at all. And as of 2007, the majority of U.S. households had no credit card debt. And as we know, people have been paring back on it ever since. So hopefully that’s even better than it used to be.

Vigeland: Yeah. Paddy, great to have you on board. Thanks for coming in.

Hirsch: Thanks very much Tess.