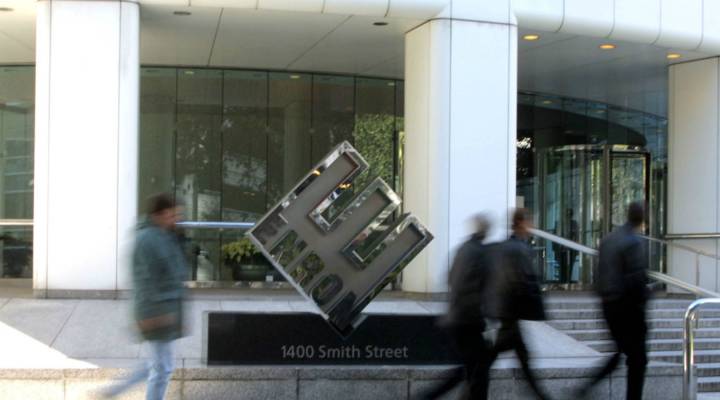 Enron employees walk past the company's logo outside its corporate headquarters back in 2001. James Nielsen/Getty Images
Commentary

Enron employees walk past the company's logo outside its corporate headquarters back in 2001. James Nielsen/Getty Images

Kai Ryssdal: Forget for a moment the debate over the eurozone. The back-and-forth over the payroll tax cut and the background noise of the 2012 elections.

Forget, in fact, everything that’s happened in exactly the past decade. Ten years ago today, Enron filed for bankruptcy. Remember them? It was a big deal. Almost $64 billion in assets, thousands of jobs and millions of dollars in retirement accounts. And where has that gotten us?

Commentator Bethany McLean has this rememberance.

Bethany McLean: Enron’s bankruptcy was the biggest in corporate American history. And it was immediately clear that this wasn’t just an implosion — it was a scandal. The Enron story leapt off the business pages to become part of the country’s cultural consciousness. Today, it still is.

Which is odd, because Enron was quickly supplanted in size by Worldcom, and in executive excess by Tyco. Who can forget Dennis Kozlowski’s $6,000 gold and burgundy floral shower curtain? And after the financial crisis, shouldn’t Enron seem quaint?

But Enron still stands out, because, of course, Enron was first. Up until that point, we believed in the permanence of big companies. They had their gleaming skyscrapers and their multibillion dollar balance sheets. Surely, the solidity conveyed by such things was real, and thousands of jobs and billions in savings couldn’t vanish almost overnight.

We also believed in watchdogs, in both the ability and willingness of boards of directors, rating agencies, investment analysts, accountants and regulators to do their jobs. We believed that Wall Street did something of value, even if we weren’t quite sure what it was. After Enron, the world seemed so much grayer. Really, should anyone be shocked that Wall Street turned bad mortgages into securities that they sold their clients? After all, Wall Street helped Enron camouflage its problems for so long.

And we believed in a market that was sort of like a just power. The market was supposed to reward those who built good things, and punish those who didn’t. But it was Enron that showed that there’s a lot of money to be made not by building a real company that will be around in a hundred years, but rather by generating short term profits. You can sell schlocky products like subprime mortgages or you can abuse accounting rules. You could juice your company’s stock, get out while you could, and say, “But the accountants and lawyers told me it was legal!”

In short, Enron was a watershed moment in American business. And not in a good way.

Ryssdal: Bethany McLean is the co-author with Joe Nocera of a history of the financial crisis called “All The Devils Are Here.” Her book about Enron is called “The Smartest Guys in the Room.”