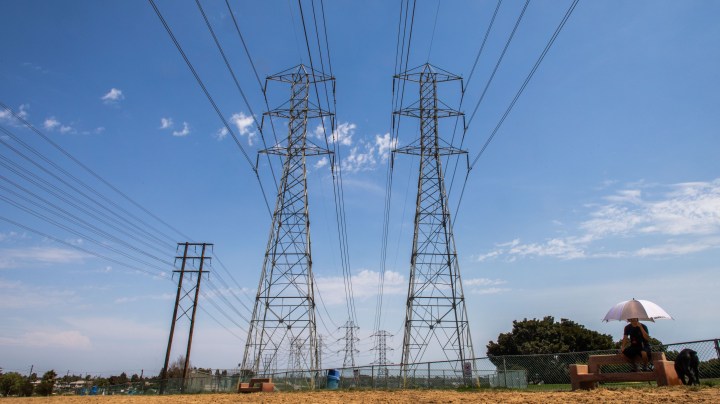 COPY
A man sits under his umbrella under high tension power lines in California in August 2020, two days after the state ordered rolling power outages. Apu Gomes/AFP via Getty Images

The term “rolling blackouts” is commonly used now. But it has a history — one that involves Enron, the energy giant that ended up in scandal two decades ago.

Steve Weissman was on a camping trip in central California when he learned that the president of the California Public Utilities Commission (CPUC) was urgently trying to reach him.

“So I drove to Groveland, California, got on the payphone on the main street, and we had a conversation,” Weissman recalled. “They were seeing dramatic blips in the price for electricity that was being paid in the wholesale market.”

Weissman had left his job at the commission a year earlier. After that call, he promptly returned to head up its initial probe into California’s skyrocketing power prices in 2000. He was certain it stemmed from the recent deregulation of California’s power markets — a push influenced by the Houston-based energy giant Enron.

”It obviously recognized it wanted to play a role in the California markets so it inserted itself in all of the proceedings where the rules were being established,” Weissman said. “I think they were largely successful in creating a set of rules that worked to their advantage.”

Enron was hardly the only company to take advantage. But it played a central role by crafting schemes to withhold power, with nicknames like Death Star, Fat Boy and Ricochet. That last one involved buying power from California at lower, capped prices, sending it out of state, then selling it back to California for a lot more when the state was desperate.

The ensuing blackouts made national news. It took a year before federal regulators finally stepped in, capping prices regionally along with other measures. The crisis cost then-California Governor Gray Davis his job in a recall election.

“I suspected all along that Enron was up to no good,” Davis said. “I never thought they’d be ordering blackouts, but that’s exactly what they did.”

“So the rumor’s true? They’re taking all the money back from you guys? All the money you stole from those poor grandmothers in California?” an Enron trader told another on one recording.

In addition to gaming California’s power markets, Enron had been up to something else: misleading its investors. After the company went bankrupt, some top executives served time for securities and accounting fraud. Three energy traders were also convicted for manipulating California’s market. While Enron is no more, California’s energy market is still deregulated.

“I’m not going to suggest that these markets are perfect but two decades later, there’s clear evidence that restructuring has improved efficiency of power plants and improved operational coordination across the grid,” said UC Berkeley economics professor Meredith Fowlie.

Fowlie said one misstep in California’s approach was limiting how much power the state could secure ahead of time, leaving much to the spot market. Former Governor Davis agreed. “About 25% of the power we need, we begin to look for at four in the afternoon on the day we need it from the 11 western states,” said Davis.

Last summer, California suffered its first rolling blackouts in almost 20 years. It was a giant red flag to Loretta Lynch, who was California’s top utility regulator under Davis. She placed that call to Steve Weissman when the energy crisis began in 2000. According to Lynch, deregulation is the problem.

“We created an electricity market that’s a casino for the electricity traders, and we all pay and pay and pay,” Lynch said. “We have to shut down that casino to protect our people and our businesses.”