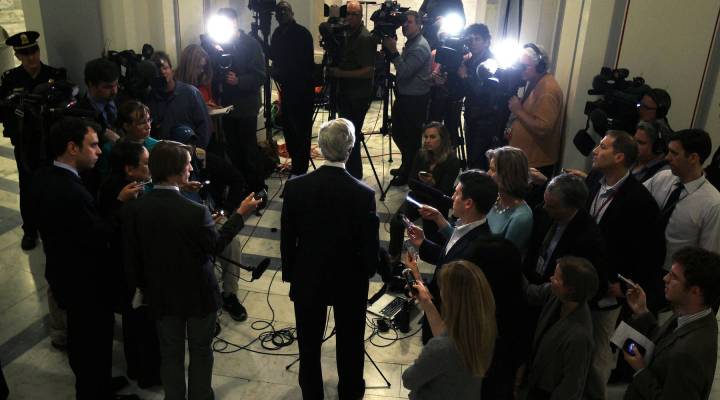 PODCAST: What the super committee lost, Egypt’s revolutionary flare up

COPY
U.S. Sen. John Kerry (D-MA) makes a statement to members of the press on the failure of the super committee'November 21, 2011 on Capitol Hill in Washington, DC. Alex Wong/Getty Images
Mid-day Update

PODCAST: What the super committee lost, Egypt’s revolutionary flare up

U.S. Sen. John Kerry (D-MA) makes a statement to members of the press on the failure of the super committee'November 21, 2011 on Capitol Hill in Washington, DC. Alex Wong/Getty Images
Listen Now

The nation’s economy grew last quarter at a 2 percent annual rate. The government is out this morning with its revised GDP estimate — which is lower than originally thought.

Stock trading has been halted this morning in Egypt, after the market there plummeted 5 percent. That followed a 4 percent drop yesterday, thanks to a new round of protests and violence in Cairo.

Now to the “super failure” by the Congressional super committee to find $1.2 trillion in deficit savings over 10 years. The big ratings agencies don’t seem to mind all that much. S&P and Moody’s say Washington’s inability to compromise will not lead to another downgrade of U.S. debt.

We got earnings from Campbell’s Soup, which made $265 million last quarter despite a decline in U.S. soup sales. That’s being blamed on higher prices for consumers. Hormel — maker of Spam — said its profit dropped by 3 percent.

Medical device maker Medtronic reported higher quarterly earnings on Tuesday as sales in most of its businesses improved.

The rate of late payments on auto loans was down in the third quarter of the year. Credit agency TransUnion also says the average size of outstanding car loans hit a record high.

The city of Sunny Isles Beach, Fla. approved a condominium development that’ll include some big elevators… And units going for as much as $9 million a pop. The 57-story project will be called the Porsche Design Tower. That’s appropriate — because the elevators will take residents and their cars right to their floor.  If you get stuck… Just honk.

A quick scan of this morning’s newspapers finds a disturbing trend: Thanksgiving Scare Tactics. The Wall Street Journal warns: that eating such a big meal can increase the risk of health problems. The Associated Press cautions:  Thanksgiving dinner alone can exceed 2-thousand milligrams of salt: And the Boston Globe offers  this profound tip: Instead of piling a full cup of mashed potatoes on your plate, consider scooping only half as much to cut calories. Wow, I never thought of that. Now, I’m all for healthy eating — but come on… It’s Thanksgiving. Live a little.

And in today’s Mid-day Extra, we learn that six degrees of separation is an outdated concept.