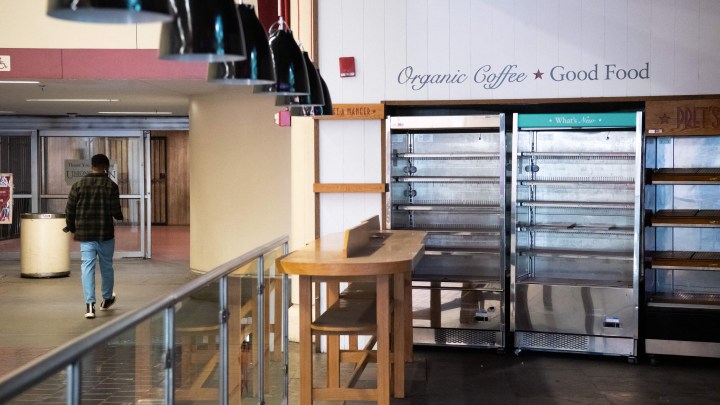 COPY
The pandemic recession may be over, but many businesses are still closed or nearly empty at Union Station in Washington, D.C., more than a year after the COVID-19 shutdown. Saul Loeb/AFP via Getty Images

The pandemic recession may be over, but many businesses are still closed or nearly empty at Union Station in Washington, D.C., more than a year after the COVID-19 shutdown. Saul Loeb/AFP via Getty Images
Listen Now

The pandemic recession is over. At least that’s according to the National Bureau of Economic Research’s Business Cycle Dating Committee on Monday.

In fact, the committee said the recession has been over since April of last year and that it was two months long.

But if you ask Mike Schwitter if the recession feels over, the New York-based actor, who was on tour with “Les Misérables” before the pandemic, will put it bluntly: “No.”

“Broadway, off-Broadway, none of that has come back 100% yet. We’re still in a little bit of limbo,” he said.

But Schwitter is not the National Bureau of Economic Research, which defines recessions in a very specific way.

“The typical way that we think about a recession is looking at the movement from the peak in economic activity before it’s down to the trough, meaning the low point in terms of economic activity,” said Matthew Luzzetti, chief U.S. economist at Deutsche Bank.

A recession is a period between when the economy starts to fall, and when it has finished falling and starts to pick itself back up. That means the end of a recession is not when things are good, but when they’re actually at rock bottom.

For this recession, that was in April, and it was pretty low.

“We’re in the recovery phase. That doesn’t mean we have recovered,” Hunter said.

But that recovery has been incredibly quick, and so was the recession itself. Compared to the Great Recession, which lasted 18 months and whose recovery took nearly 10 years, this recession lasted just two months.

That’s “faster than most recoveries, in part because of the vaccines and the huge fiscal policy response,” said Jason Furman, who teaches economics at Harvard University.

Thanks to government assistance, household incomes increased during the recession, which is unprecedented and helped consumers bounce back more quickly.

The economy measured in gross domestic product will be as if there never was a pandemic by the end of this year, according to Deutsche Bank’s Luzzetti.

In terms of employment, KPMG’s Hunter said we’ll be fully recovered by the middle of 2022.

Oh, and Schwitter, the actor?

He’s in real estate until theaters reopen. And he said business is booming.