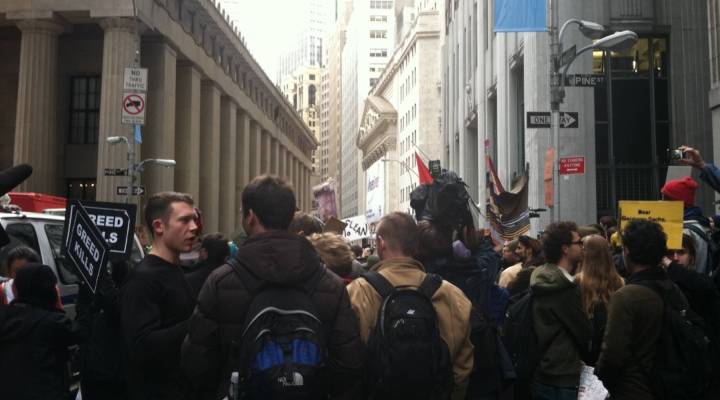 STEVE CHIOTAKIS: Hundreds of protesters in the Occupy Wall Street movement are gathered right now in front of the New York Stock Exchange with a goal of at least trying to disrupt the inner workings of what’s going on inside.

Marketplace’s Stacey-Vanek Smith has a first hand view and is on the scene. Hey Stacey.

CHIOTAKIS: What’s going on over there right now?

SMITH: Well, it’s pretty chaotic, there are marchers and protesters everywhere waving signs, there are hundreds and hundreds of people, it’s hard to tell because Lower Manhattan is really dense so everyone’s spread out through the streets. Police barricades are everywhere, there are police in riot gear, there’s a lot of noise as you can hear.

CHIOTAKIS: I can definitely hear it, and I know protesters are calling for a new beginning, Stacey, to the Occupy movement after being thrown out of Zuccotti Park earlier this week. What’s at stake?

SMITH: Right, well today’s the two month anniversary of the Occupy Wall Street movement, and yes, they have been kicked out of Zuccotti Park for all intents and purposes. So I think what’s at stake for the movement right now, people feel is momentum, they’re either going to lose momentum today or gain it because of the closure of Zuccotti Park. I think a lot of people feel like the goal is to stop the ringing of the bell at the Stock Exchange and ring the people’s bell instead, so it’s quite a symbolic day today for that reason as well.