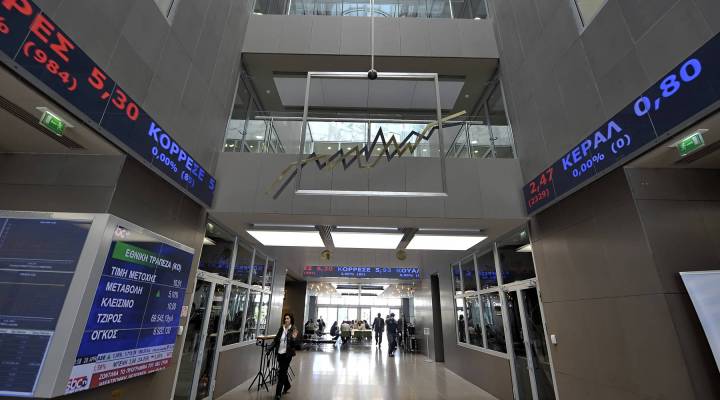 Kai Ryssdal: OK, so any takers out there for a little Italian sovereign debt? Anyone?

What about Greek bonds? Anybody?

Yeah, that’s kind of what the markets are saying too. Now that banks and other big investors are madly trying to get rid of the billions of dollars worth of government debt they hold, lest it turn out to be worthless, you could say sovereign debt’s looking a little toxic.

Stacey Vanek Smith: Not so long ago, when you wanted a super safe place to put your money, government bonds topped the list.

Marilyn Cohen is a bond manager for Envision Capital Management.

Marilyn Cohen: It used to be thought of as the creme de la creme, that a country can’t default and their AAA status would never be impaired.

Cohen says banks and institutional investors believed this so strongly, they loaded up on European debt, even though some eurozone economies were sputtering. Then these investors realized their Greek bonds were worth half of face value.

Beth Ann Bovino is an economist with Standard and Poor’s.

Beth Ann Bovino: We just saw holders of Greek debt being asked to accept a 50 percent haircut. What would happen if this happened to Italy? And investors, of course, are rightfully panicked.

As of June, American banks reportedly held $47 billion worth of Italian debt. European banks? More than $800 billion. Bovino says it’s not so different from the days of mortgage-backed securities — a once-coveted investment becoming a hot potato.

Market analyst Dan Nigro says investors are worried that the eurozone can’t guarantee the debt of its members.

Dan Nigro: I fear that everyone realizes that the Euro resources are not capable of defending Italy, plus Spain, plus Portugal, plus Greece.