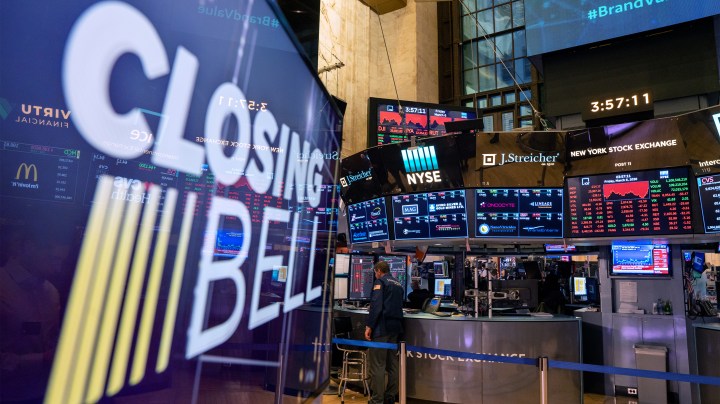 COPY
Real yields on bonds fell to about negative half a percent on Friday. Above, the floor of the NYSE after the closing bell March 6, 2020. David Dee Delgado/Getty Images
COVID-19

Real yields on bonds fell to about negative half a percent on Friday. Above, the floor of the NYSE after the closing bell March 6, 2020. David Dee Delgado/Getty Images
Listen Now

The yield is the annual interest rate a bond pays for the benchmark 10-year Treasury note. Friday, it was a stunningly low at 0.77% at the close — and that wasn’t even the intra-day low. But hey, at least it’s still positive, right?

Well, no. Because of inflation, “real yields” have gone negative. When you factor inflation, investors are actually losing money by lending to the U.S. government. The “real” yield on the 10-year-note is about negative 0.5%. Why would anybody do that?

“People are willing to pay up for that safety,” said Karissa McDonough, chief fixed income strategist with People’s United Advisors. “They’re effectively giving up future sources of real yield to park their money to be safe today.”

This has happened here before, during the European debt crisis in 2012 and 13. Robin Brooks, chief economist at the Institute of International Finance, an industry trade group, said investors are anticipating the Fed will likely need to cut rates even further to cushion the blow from COVID-19.

“If real rates are negative the way that they are now, it’s sort of a realization that ‘Holy cow, perhaps the Fed will be at zero for a very long time,'” Brooks said.

The fear that’s driving investors into bonds could slow growth even more.

Just this week, the Institute of International Finance downgraded its growth forecast for the U.S. from 2% to 1.3% because of the virus.

“You can buy dividend-paying stocks or real estate investment trusts,” Cohen said. “Well, those are very different instruments as your bond surrogate. They act very differently. Yes, their yields are higher than bonds.”

But, she explained, the risks are higher, too.