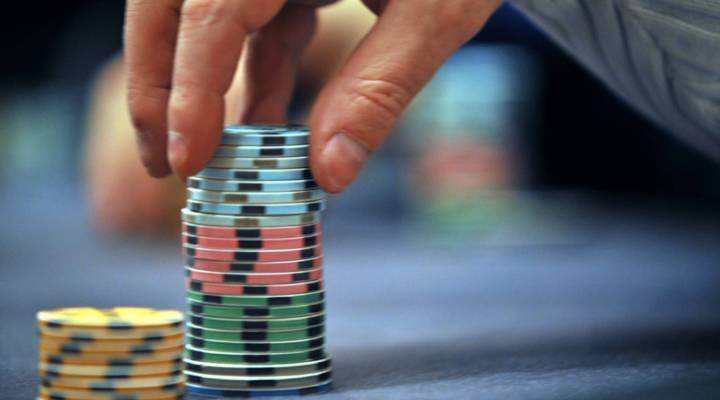 We know people are gambling more in this down economy – but cheating more too? The *Las Vegas Sun *quotes security officials at gaming firms saying cheats have used everything from hidden cameras to marked cards to scam more than $24 million this year. That news is making the Marketplace Daily Pulse feel a little weak today.

The Sun interviewed Darrin Hoke, director of surveillance for the L’Auberge du Lac casino in Lake Charles, La. Hoke is at the Global Gaming Expo, the world’s largest gambling industry event, in Las Vegas this week.

Hoke said cheats are using all types of methods to scam casinos, The high-tech systems seem to snag the highest pots. One group of gamblers netted millions by stealing card shoes and outfitting them with mirrors and cameras. But the low-tech approaches are still popular. Hoke said some scammers cheated by marking cards. This week, two people were arrested for trying to cheat at craps by sliding dice instead of rolling them. And in Singapore, gamblers took an even more simple route and just stole a bunch of chips.

The big casino companies’ biggest worry isn’t being cheated by scammers, however; it’s China. On Monday, the multinational casino companies shares took a beating, dropping anywhere from 3.3 percent to 9.3 percent. Las Vegas Sands, Wynn, Melco Crown and MGM all have operations in Macau, so they’re all affected by fears that tighter credit in China will curtail the flow of wealthy high-rolling gamblers that have powered Macau’s boom.

Still, casino stocks are still trading outperforming the S&P 500. They’ve been taking a beating like every other sector in the market, but investors still seem to feel they’re one of the most recession-proof options in the market today. Buyers stepped in to snap up Wynn after it tanked, even though there’s no news out of China to allay fears of a downturn there.