New home sales at half the healthy level for economy

New home sales at half the healthy level for economy

Adriene Hill: New home sales fell again in August — reaching a 6 month low. According to figures just out this morning, sales dropped off 2.3 percent. In actual number of houses, that points to an annual rate of 295,000 homes, which sounds like a lot, but is actually less than half of the number of new homes that economists think need to sell in order to create a healthy housing market.

To put all these numbers in perspective for us, we reached out to Patrick Newport. He’s a housing economist with IHS Global Insight. Good morning.

Hill: So what are you seeing in these numbers today?

Newport: Well, these are pretty bad numbers — these are the 7th worst numbers that we’ve ever had. And 2011 is shaping up to the be the worst year on record for new home sales.

Hill: And what’s it tell us about the economy?

Newport: It doesn’t tell us much about the economy. It tells us that the housing market — or at least the market for new homes — is just stuck at the bottom, and there’s no signs that it’s going to get out of it very soon.

Hill: Why are they stuck?

Newport: Well I think there are two reasons. One of them is the foreclosure problem, and I think the second reason is related to builders having trouble getting credit — it’s a combination of the two.

Hill: Now, the Obama administration is working on a plan that might allow more borrowers to refinance at low rates. What impact could that have on the housing market?

Newport: I think it might have a positive impact, but there has a study by an economist at MIT and from the Congressional Budget Office, and their conclusion is that it would be a good thing for the economy, but it wouldn’t solve the housing market’s problems.

Hill: Why is that?

Newport: For the most part, it just puts money in the pocket of some people, but not that much. And on top of that, taxpayers will take a hit on this. So, when you add the winners and the losers together on that, it’s a positive but not a game-changer.

Hill: Patrick Newport is a housing economist with IHS Global Insight. Thanks so much.

Newport: Thanks for having me. 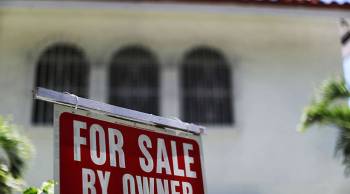