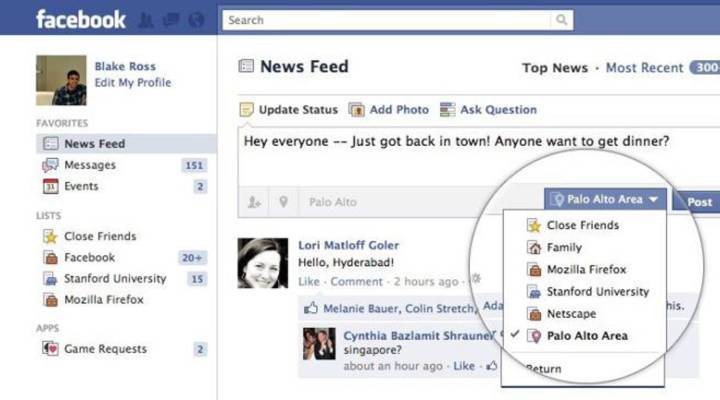 Kai Ryssdal: The Financial Times reported today that Facebook has taken a look around the ups and downs of the stock market, didn’t like it at all and decided to un-friend it. The company’s apparently going to put off its initial public offering, long rumored to have been in the works for sometime this year.

In the meantime, something akin to judgment day is coming to your Facebook account. Your Facebook friends are going to be sorted into categories — “close friends,” “family,” “Marketplace colleagues,” what have you. The idea being that users will sort their Facebook friends and tailor updates and pictures and posts to specific groups. Marketplace’s Stacey Vanek-Smith explains why.

Sharon Pak: I have probably, maybe 1,200 friends on Facebook.

Not that they’re all actually her friends.

Pak: The close-knit amount of friends that I have would probably range from about 50-60.

The problem for advertisers has been finding those 50 real friends in the pool of 1,200 Facebook friends.

James Fowler: If you know your friends bought a certain kind of jeans, then that makes you much more likely to buy those jeans as well. And that’s a much, much more accurate way of trying to identify the behavior of somebody, rather than just their age or their ethnic background or what zip code they live in.

Social networks like Facebook offer advertisers unprecedented access to our circle of friends as well as several hundred other people who don’t influence us at all. Fowler says businesses have been searching for the Rosetta Stone that will help them tell the difference.

Fowler: The 64 million dollar question at this point is who are the people in your social network that matter?

A couple months ago, Google+ came out with one solution. When you connect with someone, you have to slot them into a category or circle — things like work or friends. Facebook users have had that option since 2007, but almost no one took the trouble. Now Facebook is getting assertive — using predictive software to pre-sort your friends into categories like “close friends” “acquaintances,” “work.” Users can modify the lists and create new ones.

Matt Britton is the CEO of marketing firm, Mr. Youth. He says the advertising possibilities are big.

Matt Britton: So if you’re selling office-related products, I can target a user and their work friends. Or if I’m selling university-branded apparel, I can sell a user and their school friends.