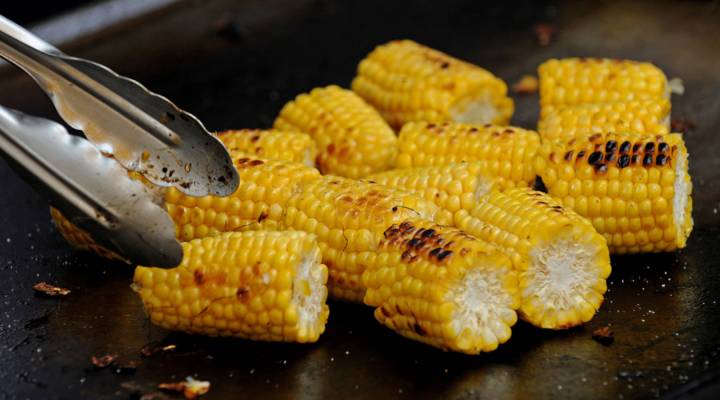 Cereal killer: Corn crop could be worst since 2005

Cereal killer: Corn crop could be worst since 2005

Corn is cooked during a barbecue. Greg Wood/AFP/Getty Images

The USDA had some bad news for people who like to eat corn-based products today. The hot, dry summer is to blame for what’s likely to be a poor corn harvest this year. A crop production report out today says this could be the worst harvest since 2005.

The report wasn’t all bad. The USDA said yields for soybeans and wheat will rise. But the summer heat has given corn an particularly hard time this year.

“Unusually hot weather persisted across the central Plains, Midwest and Southeast during the first week of August, promoting rapid crop development while negatively impacting crop conditions,” the report said. “Beneficial rains were reported in the extreme northern corn-producing areas, while most of the Midwest received little or no rainfall.”

The news wasn’t a surprise to many agronomists, who’ve been predicting lower corn yields for some time, even though farmers planted the second-largest crop since World War II in the spring.

The Wall Street Journal reported that on the demand side, there is less corn amid high prices. The USDA cut its forecasts for both corn exports and consumption by the ethanol industry.

The Associated press said corn prices soared to record levels earlier this year because of limited supplies. On Monday, corn was trading at $7.30 a bushel. While that’s down from the peak of $7.87 a bushel reached on June 10, it’s still nearly twice the price of corn at the end of July 2010.

More expensive corn drives food prices higher because corn is an ingredient in everything from animal feed to cereal to soft drinks. It takes about six months for corn prices to trickle down to products at the grocery store.

Traders worry that grain shortages could return next year because of the damaged crops.

Farmers are expected to have a surplus of 920 million bushels when the harvest begins next month, the USDA said. That’s roughly a 26-day supply of corn, slightly less than the previous month’s estimate.

But the USDA said the corn surplus could dwindle next fall to about a 19-day supply. A 30-day supply is considered healthy.