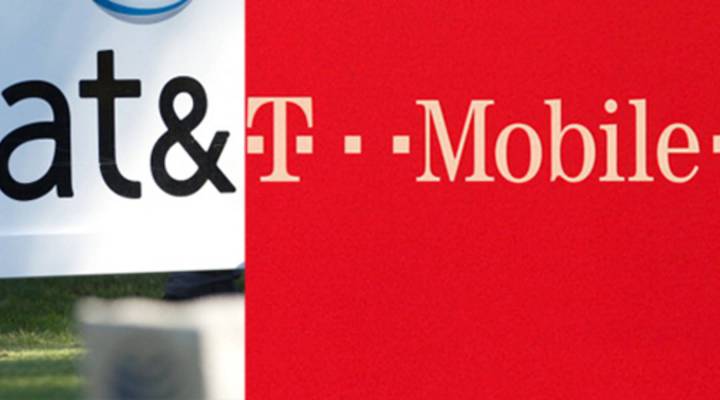 Kai Ryssdal: With all due respect to those Sprint cell phone commercials, you probably can hear a pin drop at AT&T today.

This morning, the Justice Department said ixnay to Ma Bell’s ake-overtay of T-Mobile. What would have been a $39 billion deal would have married up the second and fourth largest mobile companies in the country. The Obama administration says that’d be bad for competition and prices.

Marketplace’s Stacey Vanek Smith has more on the corporate story of the day.

Kagan thinks Ma Bell will fight for T-Mobile. Not only would it have to pay T-Mobile at least $3 billion if the deal doesn’t happen, AT&T desperately needs more access to the airwaves — known as spectrum — to support all of the talking and web surfing its customers do.

Kagan: AT&T has had such spectrum problems: With all the reporting of the iPhone and the wireless data traffic jams and all the complaints that people have had. That’s why they’re doing this deal.

Antitrust lawyer Mark Ostro says the Justice Department’s case is strong, and it would be hard to AT&T to offer enough concessions to save the $39 billion deal.

Mark Ostro: By putting a stake in the ground and saying, ‘here are the various problems we have with this transaction,’ it makes a settlement much more difficult.

So what’s next for T-Mobile? Deutsche Telekom wants to unload its U.S. division, and if the AT&T deal falls through, it will probably be looking for another buyer for T-Mobile.

Carl Howe with the Yankee Group doesn’t think that will be hard to find.

Carl Howe: It’s one of only four national networks in the United States. And even if they’re the smallest of the players, they have national coverage and they have fairly loyal customers.

Howe says Sprint might move to buy T-Mobile, as well as companies that want to expand into wireless communications like Comcast and Google.