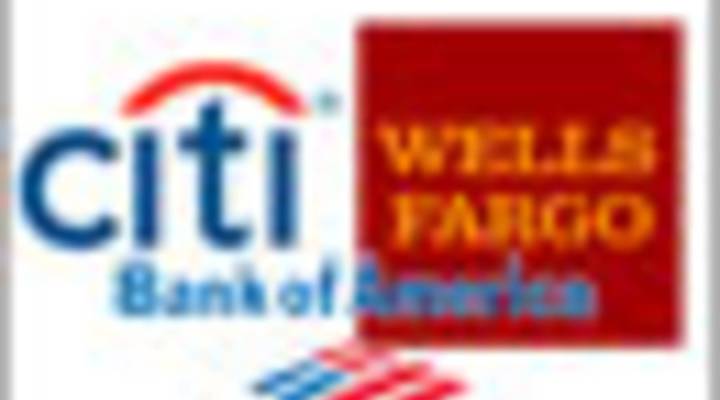 Banks are jumpin’ and the market is high

Banks are jumpin’ and the market is high

Bank of America, Citi, Wells, RBS, up, up, UP! Shares in banking companies sashayed higher today … and no-one could really explain why.

Many of these shares were bludgeoned by investors during the early part of this week, particularly Bank of America. The company’s shares lurched bank and forth in trading during the week: they plummeted 20 percent on Monday, recovered a little ground on Tuesday, and fell another 11 percent on Wednesday. They’re now down about 17 percent on the week.

BAC was probably the worst hit, but few financials escaped unscathed. Some investors explained the declines by citing concernsabout the economy, the housing market and the Eurozone. Others noted that those concerns have been hanging over the market for weeks, and there’s no new news driving financials back up again.

Actually, not all financials are up. Goldman Sachs, JP Morgan and Morgan Stanley were all lower in midday trading. Really? GS down and BAC up? How do you explain that?

**Marketplace examines the disconnect between the markets and the economy. Every day, we’re reporting on the divide between Wall Street and Main Street, and on what’s being done about it. Follow our up-to-the-minute coverage of the markets and economy in our special section and blog Market Mayhem/Economic Standstill.****

The IPO industrial complex is starting to get worried