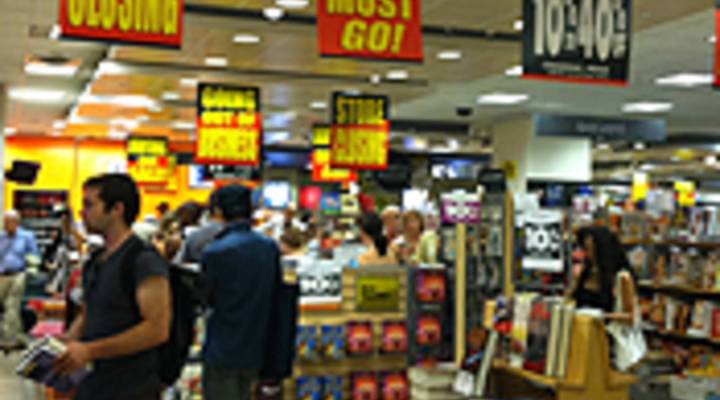 Kai Ryssdal: In the truest sense of the phrase going out of business, liquidation sales started at 399 soon-to-be former Borders bookstores today. After being unable to find a buyer for the whole business, Borders is unloading everything from books to DVDs to the very furniture we used to sit on while perusing the shelves.

We sent Marketplace’s Stacey Vanek Smith to check out one of the close-out sales.

Stacey Vanek Smith: I remember when Borders first opened in my hometown. It was enormous and everybody was there. Little did I know, a couple decades later, I’d be at their liquidation sale.

At a Borders in New York City, the line wound through the store, which is pretty unusual, according to longtime customer Tessa Souter.

Tessa Souter: It’s usually super quiet. So it’s got kind of a library vibe, which is quite nice.

Well, not for the bottom line. Borders declared bankruptcy in February and now it’s selling everything. Book industry consultant Mike Shatzkin says Borders made some mistakes but essentially was overwhelmed by online stores like Amazon.

Mike Shatzkin: When Borders started, the best place to go if you had to look for something, was a place that had 125,000 titles in it. Now the best place go is online, where you can choose from three or four million titles.

Neil Hanlon: Yes, I’ve been sort of watching the Borders’ decline for a few years now, and I’m very, very sad about it.

That’s Nell Hanlon — I caught up with her in line buying cookbooks, classical music CDs and some BBC films. But even she admitted to using her cell phone to compare prices as she picked over the remains at Borders.

Hanlon: I did put a few things back because I can either get them on the Kindle for cheaper or I can purchase them on Amazon for cheaper.

Wait a minute — even the prices at Borders’ liquidation sale can’t compete with Amazon? Not that there weren’t bargains.

Vanek Smith: Oh! The complete cartoons for the New Yorker.

For $19.99 — you can’t beat that online. While I was in line, I saw The Grapes of Wrath and a DVD of Footloose — those impulse buys brought my bill to almost $80.