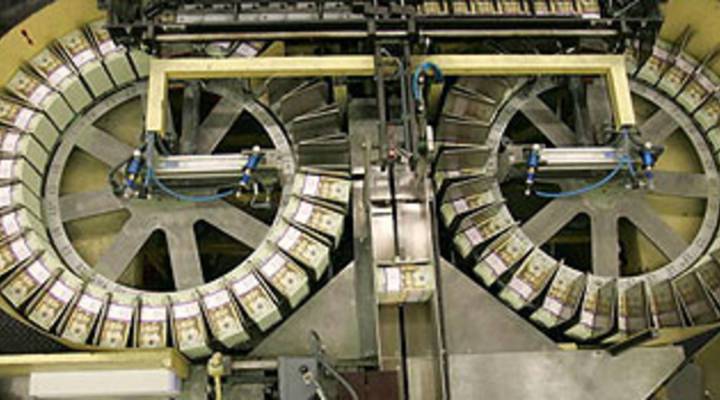 COPY
Bundles of newly printed bills are prepared for distribution to financial institutions at the Department of the Treasury Bureau of Engraving and Printing in Washington, D.C. Joe Raedle/Getty Images

Bundles of newly printed bills are prepared for distribution to financial institutions at the Department of the Treasury Bureau of Engraving and Printing in Washington, D.C. Joe Raedle/Getty Images
Listen Now

Kai Ryssdal: There are no second acts, it’s been said, in American lives. But F. Scott Fitzgerald must not have known much about the American economy, because one of the biggest economic second acts ever wraps up today. QE2 (quantitative easing 2), the Federal Reserve’s $600 billion economic rescue effort, is over and done.

Stacey Vanek Smith: Quantitative easing is pretty much a giant shopping spree for the Federal Reserve. The Fed buys bonds — mostly U.S. Treasury Bonds. Basically, we’re buying our own debt. Since QE2 started, the Fed has bought 85 percent of the T-Bills the U.S. has issued. That pushes money into the economy, hopefully creating jobs and spurring growth. So, did it work?

Michelle Meyer: I think on balance, QE2 was a net positive for the economy.

Meyer: It helped bring around a rally in the stock market that supports the corporate sector.

Since the Fed started its buying, markets have soared, and there’s been a spike in mergers and stock offerings. But not everybody thinks that makes the policy a success. Marilyn Cohen is a money manager and author of Surviving the Bond Bear Market. She says it did a lot of damage.

Marilyn Cohen: Global investors looked around and said, oh my gosh, the Federal Reserve is going to be buying a bunch of Treasurys, this means inflation is here. And that’s why they sold the dollar and went into stronger currencies.

Cohen says that’s part of the reason food and fuel prices have gotten so high. And then there’s unemployment and housing, which QE2 hasn’t been able to budge. Still, economist Lawrence White with NYU’s Stern School of Business, says without the Fed’s help, it would be lots worse.

Lawrence White: I’m quite convinced unemployment would have been even higher in the absence of QE2.

The difficulty now, White says, is how the bond market — and the economy — will survive without the Treasury’s best customer.