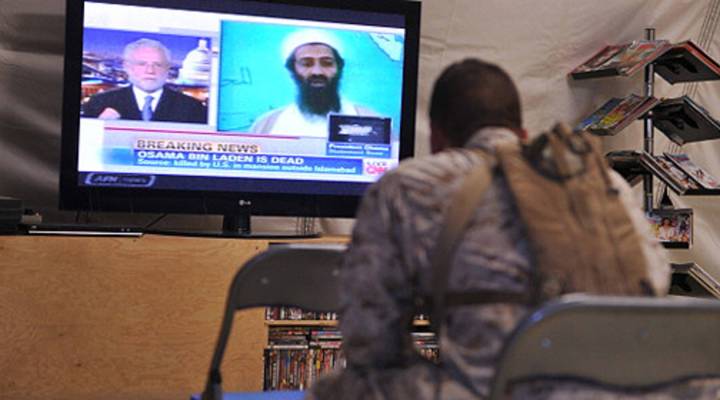 What bin Laden’s death means for future financing against terrorism

What bin Laden’s death means for future financing against terrorism

Tess Vigeland: It was, apparently, pure detective work that led to last night’s news of the death of Osama bin Laden at the hands of an American military team. The culmination of a nearly 10-year hunt for the mastermind of the 9/11 attacks. In that time, blood and treasure have poured from the U.S. into two wars and countless security measures.

And now, questions of what bin Laden’s death means for future financing of the War on Terror. Joining us is Stuart Levey, former undersecretary of terrorism and financial intelligence at the Treasury Department. Welcome.

Stuart Levey: Thank you for having me.

Vigeland: Let’s talk about both sides of the financing coin here. First, what does the bin Laden’s death mean for the financing of terrorist operations? How instrumental was he personally with his personal fortune and then his ability to raise funds because of who he was?

Levey: There was a myth that he was funding al-Qaida out of his personal fortune, but that really was a myth. But he was a very, very important fundraising symbol for al-Qaida and his death will be a very significant blow to al-Qaida’s ability to raise money around the world — both in terms of inspiration, but also interestingly in terms of authentication. Because one thing that al-Qaida’s had to do in order to raise money in Gulf countries in particular, as more pressure has been put on al-Qaida, is they’ve had to fundraisers who can authenticate that they are actually representing bin Laden and al-Qaida. With the loss of bin Laden I think that that sort of fundraising will become more difficult and complicated.

Vigeland: When you say that it will have a significant effect, can you quantify that at all? How key was he?

Levey: It remains to be seen how key he was. So what’s happened in the last few years is that al-Qaida’s finances have been put under significant pressure. There was a tremendous crackdown on al-Qaida’s facilitation in Saudi Arabia and elsewhere in the Gulf. Also there was the death of Sheikh Sa’id, who was we thought the number three official in al-Qaida and who was thought to be the chief financial officer. That happened in Mayof 2010. So the combined loss of Sheikh Sa’id with the loss of bin Laden could be tremendously painful to al-Qaida from a financial perspective.

Vigeland: Well here in the U.S., bin Laden has really been the rallying figure for spending money on the War on Terror. How does his death now affect our willingness to spend blood and treasure in the continuing effort?

Levey: Well it’s hard to say today. I think today everyone is focusing on the success of the operation. I hope people are focusing on how lucky we are to have the kinds of government servants who carried out this very, very brave operation. But over time, I think people will take a look at the impact on the overall fight against terrorism and what they’ll realize is that this doesn’t erase the threat. There are still organizations that threaten us. There is al-Shabaab in Somalia, al-Qaida in the Arabian peninsula and Yemen. And we’ve seen, unfortunately, in the last few years that those organizations pose a real threat to us here in the United States.

Vigeland: What effect, if any, do you think this will have on what has been a global effort? Is there any concern at this point that you may lose the cooperation on some other nations?

Levey: I would be speculation, of course, Tess. But I hope that people realize that this is just one person. The hard work that was done to build up this global coalition and the kind of cooperation that has developed — both on the tactical level and between individual agencies around the world, as well as high levels of government — it would be a real shame if that kind of cooperation didn’t continue. The loss of bin Laden is a reason to continue cooperating as opposed to a reason to stop cooperating.

Vigeland: Stuart Levey was the undersecretary for terrorism and financial intelligence under both the Bush and Obama administrations. He’s currently with the Council on Foreign Relations. Thank you so much for taking the time to talk with us today.