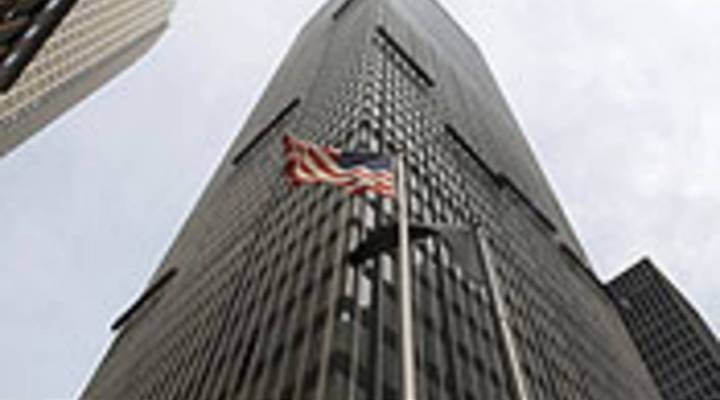 Tess Vigeland: Today federal banking regulators announced settlements with 14 of the country’s largest home mortgage lenders, including Bank of America, Citigroup and JPMorgan Chase. As punishment for shoddy foreclosure practices like the robo-signing of documents, the banks will have to overhaul their foreclosure operations and compensate borrowers who were wrongly evicted. The agreements appear to be far less than what state attorneys general are seeking separately. The mortgage servicers neither admitted nor denied wrongdoing.

But as JPMorgan made clear in its quarterly earning report, the mortgage mess is one of the challenges that weighs on its bottom line. Marketplace’s Stacey Vanek Smith has details from New York.

Keith Davis: The data so far from JPMorgan suggests that we’re still in trouble.

Davis says JPMorgan, and all the big banks, are actually seeing their business shrink. So they’re using money they set aside during the financial crisis to now buffer their bottom lines.

Davis: The whole source of that growth is the fact that they took reserves right off their balance sheet and they let them drop to the bottom line. That’s not true growth.

JPMorgan’s retail banking sector lost money compared to last year — that’s things like home loans, credit cards and small business loans. Ken Thomas is an economist with the Wharton School. He says at the same time, there have been new government restrictions on bank lending and fees.

Profits from former cash cows like overdraft fees and interest rates. And if that weren’t enough, banks are also under fire for faulty mortgage paperwork and possibly misrepresenting the investments they sold. JPMorgan alone set aside more than $1 billion this quarter for those legal issues. Economist Keith Davis.

Davis says it will time for banks to find their footing in this new environment. He doesn’t expect real growth to resume for several years.