STEVE CHIOTAKIS: As you’ll undoubtedly hear a lot about today, President Hu Jintao of China will be visiting the United States starting today. Meeting with President Obama at the White House. One thing that they’ll probably talk about is this morning’s Financial Times report that the Chinese lend more to developing countries than the World Bank — an agency with a mission to lend to developing countries.

CHRIS HOGG: China has a lot of cash available to try to win friends and influence. In fact, the country has about $2 trillion of cash in reserve. One thing China has been doing with that money is buying U.S. debt. But the country, through two state-owned banks, is doing something else — furthering China’s national interests by funding projects in poorer countries.

Patrick Chovanec is from Tsinghua University’s School of Economics and Management in Beijing. He says it’s easier to invest in these emerging markets, than in the U.S. or Europe.

PATRICK CHOVANEC: A lot of Chinese companies that find it difficult to enter a highly competitive market in North America or Europe find that their products or their infrastructure projects are very welcome in developing countries.

But it doesn’t come for free. Loans are granted in return for guarantees of energy supplies, for promises to open up markets for Chinese goods, or simply to win support for Chinese policies at places like the UN.

In Shanghai I’m the BBC’s Chris Hogg for Marketplace. 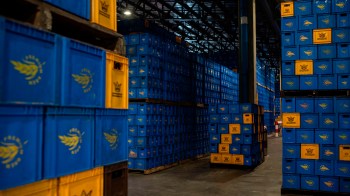