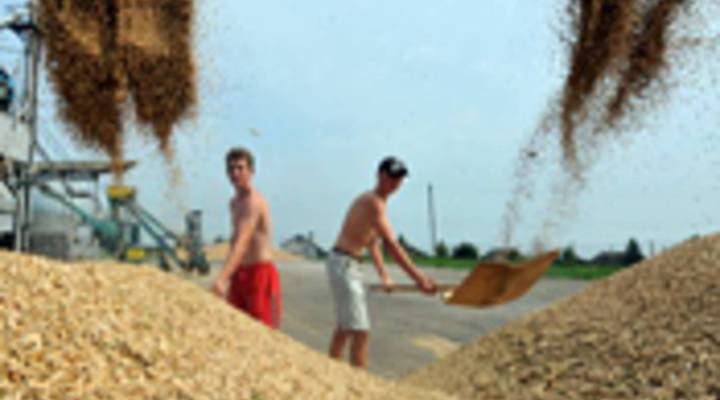 Kai Ryssdal: There was a report out today on inflation at the wholesale level. There isn’t any. What’s called the Producer Price Index rose just a tenth of a percent — basically flat — provided you take out food and energy costs. Government economists might be able to do that; use what’s called the core PPI.

But the rest of us do have to drive and eat, though, which is why it’s worth a mention that food prices have been shooting up in large part because commodity prices are spiking. Wheat’s up 50 percent, corn gets more expensive by the day, everything, from soybeans to cocoa is getting up there.

Marketplace’s Stacey Vanek Smith has more on why everybody’s hungry for commodities.

Stacey Vanek Smith: It’s the end of a dramatic day in the corn pit at the Chicago Mercantile Exchange. Corn futures for December close at $4.95 a bushel — a two-year high.

That’s commodities analyst Dan Manternach, with Doane Advisory Services. He says prices have soared for everything from wheat to cocoa to pork. Part of the reason is good old supply and demand. On the demand side, China and India have gotten wealthier.

Manternach: The very first thing developing countries do as their income grows is they improve their diet.

Buying more meat and more feed for livestock. On the supply side, there’s the weather, which has gotten more volatile in recent years, making crops less reliable.

Rising demand plus tight supply is likely to keep commodities prices rising, says Matthew Pierce, an analyst for pitguru.com. He says that’s a magnet for investors and speculators.

Matthew Pierce: It offers an outlet for capital that has been sitting around on the sidelines. It’s one of the few markets out there right now that are trending in one direction versus anything in equities, which is a complete chop.

In other words, with the stock market looking stagnant, the commodities market — which used to be considered one of the riskiest places to invest — suddenly seems like a safe place to make a return. It’s also become a place for investors worried about inflation, says analyst Dan Manternach.

Manternach says traditionally, investors who were worried about the dollar losing value would buy gold or oil. But those have gotten so expensive, investors are now putting that money into things like wheat and corn. So far this year, investors have poured more than $12 billion into commodity funds.

And that’s sparking talk of a bubble. Pitguru’s Matthew Pierce says that has food companies in bubble-battle mode.

The bad economy makes it tough to pass higher prices onto consumers, so food companies are stockpiling what they need and selling some of their own crops at a premium. That works for bigger companies, but smaller businesses have to take a different approach.

At an Intelligentsia coffee shop in Los Angeles, Black Cat espresso beans are ground up for an iced latte. Doug Zell is the CEO of the gourmet roaster and coffee shop chain.

That volatility makes it hard for Zell to anticipate his costs, so he’s locking in long-term contracts with coffee growers. For coffee drinkers, Intelligentsia has started charging different prices for different kinds of coffee.

Zell: So it’s not just a 12-oz. cup is $2, it can vary depending on how much the actual cost of the coffee was, just as if you went to a wine bar, you’re going to see different prices by the glass or by the bottle.

Zell says he wants his customers to think of coffee as a gourmet product instead of as a commodity. But as long as investors are thinking of commodities as a way to make money, not coffee, those iced lattes are likely to keep getting more expensive to make.