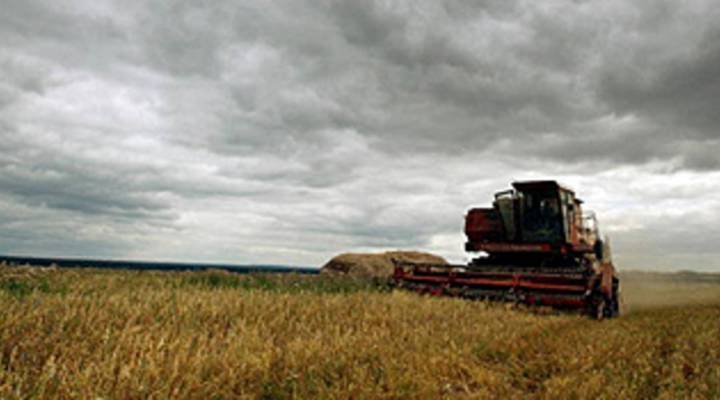 Wheat prices leap up, droughts in Russia, Australia and Argentina to blame?

COPY
A harvester works in a wheat field in the Russian village of Nur-Shari. Oleg Nikishin/Getty Images

Wheat prices leap up, droughts in Russia, Australia and Argentina to blame?

A harvester works in a wheat field in the Russian village of Nur-Shari. Oleg Nikishin/Getty Images
Listen Now

KAI RYSSDAL:If you happened to have been with us yesterday, you heard about the “BLT bump,” a rise in pork prices that’s affecting the cost of the premiere ingredient in that popular sandwich. Today, there’s another bump for the price of a BLT. An item without which you can’t make a good sandwich of any kind. Wheat prices are hitting highs for the year, as Marketplace’s Stacey Vanek Smith explains.

Stacey Vanek Smith: This summer, the price of wheat has jumped more than 50 percent. It’s now about $6.80 a bushel.

Dan Manternach is a wheat analyst for Doane Advisory Services. He says that’s mostly because of a massive drought in Russia, a major exporter of wheat.

Dan Manternach: They’re describing it as their worst drought in over 100 years.

Manternach says wheat crops in Australia and Argentina are also getting hit with hot weather. And Canada’s crop was hurt by too much rain. So now one country is poised to make a killing.

Manternach: The U.S. is the last remaining major global wheat-producing region. So it’s going to be an unusually profitable year for the U.S. wheat farmer.

Manternach estimates U.S. farmers will export 20 percent more wheat this year than they did last year.

Matthew Pierce: It’s been absolute chaos. It’s been completely out of control.

That’s Pitguru grains analyst Matthew Pierce on the floor of the Chicago Mercantile Exchange. Pierce is suspicious of the price spike. He points out that last year there was a global bumper crop of wheat, and countries are sitting on record stockpiles.

Pierce: Now all the sudden, we’re all out of wheat? It just doesn’t make sense.

Pierce attributes a lot of the price jump to speculators. He says hedge funds and other major investors are snapping up commodities like wheat. They see it as a safe investment amid volatile markets and worries about inflation.

But for the moment, high wheat prices mean one thing for Oregon wheat farmer Chris Rauch.

Chris Rauch: Profits. Pure and simple. It gives me a chance to catch up on bills and things like that.

Rauch has sold his crop for this year, next year and part of 2012.