Thoughts on digital life after death

Thoughts on digital life after death

We asked people in the Public Insight Network about whether they’ve thought about what to do with their online lives after they die.Â  Here are some of their responses:

I’ve started actively paring down the accounts I have, removing any unused accounts, consolidating services as much as possible to make management easier for me now and for my executor later. I’m working with an attorney to try and figure out how to configure my will to provide my executor with the authority to access and terminate some accounts, and to archive and preserve others. â€“Matthew Putnam, Seattle, WA

I truthfully have no concern over my accounts on Facebook and MySpace after passing, but I do have a professional responsibility as a teacher to avoid misrepresentation, identity theft and misuse. I have not enacted a plan, but I will have my children manage these accounts until it is time to remove them. â€“Mark Cultice, Plymouth, IN

I’m a constant user of Facebook, also on Twitter, LinkedIn, Plaxo, YouTube, Ning, have 2 blogs, I upload mobile pics constantly. I really have no idea how I will manage my online presence. I haven’t given tons of thought or action to it probably because I don’t know about tools that could help me manager this issue..and I also haven’t been that ‘moved’ to take action. Like planning your funeral, death isn’t something tons of people want to give tons of thought to, or action. I’m more concerned about the emotional effects my online presence may have on those I know. â€“Courtney Kuehn, Minneapolis, MN

I think it’s simply not something we give much priority to, or even value for that matter. But my husband and I have a friend who was in a terrible car accident in late March 2010. He lived, but he’s not able to speak for himself right now. He has hundreds, if not thousands, of friends on Facebook. It’s made the idea of what to do with our online presence much more real. â€“Shoni Freeman, Raleigh, NC

I have thought about it. I guess I always assumed that my husband would delete my Facebook, Twitter and MySpace accounts in the event – the LiveJournal is a bigger worry. It chronicles some deeply personal stuff over a period of six years, stuff I wouldn’t necessarily want him, or anyone in my family, to read. I have considered giving the password to my best friend with instructions to delete it. â€“Christy Marshall, Burbank, CA

Two people in my life have my “master password”. A few others have the knowledge and skills to get my personal servers up and running if something were to happen to me and continue delivery of email allowing them the means to handle my accounts. The primary thing behind having a master password is making it not related to your life and I’ve been using the same password for over a decade without it being compromised. â€“Ryan Coleman, Minneapolis, MN 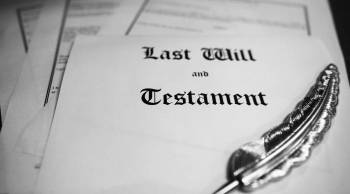 Don’t have a will? You’re not alone.