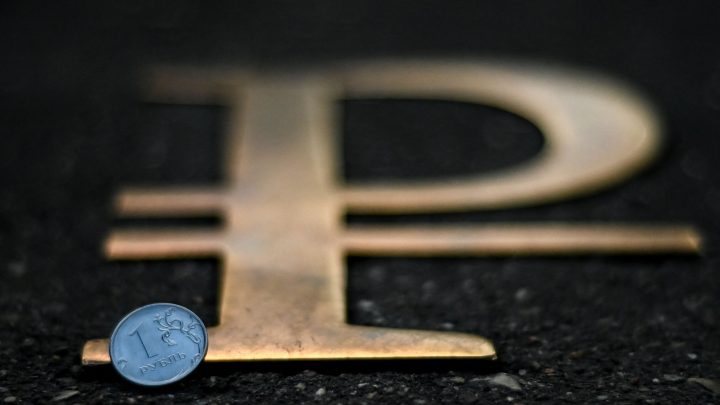 COPY
With the crash of the ruble, Russians are turning to cryptocurrency. Kirill Kudryavstev/AFP Getty Images

With the crash of the ruble, Russians are turning to cryptocurrency. Kirill Kudryavstev/AFP Getty Images
Listen Now

On the list of things Ukrainian officials are requesting from Western allies is one very 21st century weapon: cryptocurrency.

​Over the weekend Ukraine’s official Twitter account asked for donations of bitcoin, ethereum and other digital currencies. Reportedly, that’s generated $20 million worth of donations to date.

The next day, Ukraine’s vice prime minister made a different request: He asked global cryptocurrency exchanges to freeze accounts owned by Russian citizens to prevent Russia from using crypto to evade sanctions.

​Russia has one of the highest rates of cryptocurrency adoption in the world, said Caroline Malcolm with the global crypto monitoring firm Chainalysis. And while overall cryptocurrency trading volume has remained surprisingly steady in both Russia and Ukraine, she said there has been a significant increase in a specific type of transaction.

“We have seen a spike in seeing rubles being converted into bitcoin,” Malcolm said.

It’s hard to disentangle who exactly is doing those conversions, but Malcolm suspects many ordinary Russians are desperately trying to find an alternative to the plunging ruble. Even volatile bitcoin has proven more stable than the Russian fiat currency since sanctions were imposed.

Still, there’s concern among U.S. regulators that the decentralized nature of cryptocurrencies may allow some Russian oligarchs targeted with individual sanctions to protect their assets.

“It’s a bit like playing whack-a-mole,” said Lee Reiners, executive director of the Duke Global Financial Markets Center at Duke University School of Law. “Crypto’s anonymity and it’s decentralized nature is always going to pose a challenge when it comes to sanctions compliance.”

There are many services that offer private cryptocurrency accounts — called a “wallet” — without requiring much identification. And private transactions between private crypto accounts require no bank as an intermediary. That’s kind of the whole point of the technology.

Lee said that makes cryptocurrency exchanges — those websites that flooded the Super Bowl with ads —one of the few places regulators can look to enforce sanctions. Exchanges are where those moles come up for air to convert bitcoin or other digital currencies into dollars or euros.

“Frankly, they don’t have the best record on this front,” Reiners said.

Lee said while some larger U.S.-based exchanges have complied appropriately, others have dragged their feet.

So what about the Russian state? Could cryptocurrency blunt the impact of unprecedented sanctions?

“There is no digital currency platform that is going to help Russia out of this situation right now,” said Michael Greenwald, a former Treasury Department official.