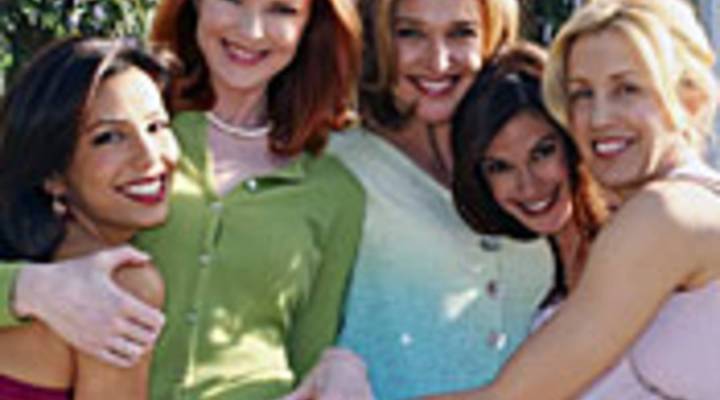 TV donates some time to volunteerism

TV donates some time to volunteerism

Kai Ryssdal: President Obama was down in Texas this past Friday. He joined former President George H.W. Bush at an awards ceremony honoring community service. That continues a theme the White House kicked off this summer: the United We Serve campaign that encourages Americans to volunteer. Starting today, the president will have some help from some rather unlikely places. Places like Wisteria Lane. Seattle Grace Hospital. And forensic crime scenes across the country. Marketplace’s Stacey Vanek-Smith tunes us in.

STACEY VANEK-SMITH: The dreamy doctors of “Grey’s Anatomy” will be removing their scrubs again this week but only to give blood. The “Desperate Housewives” will be spying on each other, as usual.

DESPERATE HOUSEWIVES: You lie, you cheat, you scheme, you ruin people’s relationships. I mean, how do you sleep at night?

But this time their snooping is part of a neighborhood watch. Oh, and swinging single guy “Gary Unmarried” is making videos to send to troops overseas.

Jeff Bader is the executive vice president for ABC Entertainment.

JEFF BADER: Give a person a fish, he’ll eat for a day. Show a person fishing on TV, and you will have people fishing all over the country. I mean, that’s basically the idea.

The Entertainment Industry Foundation, one of Hollywood’s biggest charities, is behind “I Participate,” a week-long effort to encourage volunteering by airing public-service announcements and weaving volunteering themes into shows. More than 100 shows, from “Dancing with the Stars” to “Hannah Montana” will be getting the word out. It’s an industry-wide effort including big broadcasters like NBC and CBS, as well as cable networks like Nickelodeon.

PRESTON BECKMAN: I remember when I sat down with everybody from each area, I figured I’d get a lot of eyes rolling and this and that, and everybody was just: “Let’s do it! And they’ve done it.”

But will it work? Will watching a sexy doctor give blood make the rest of us want to roll up our sleeves?

MARTY KAPLAN: One of the famous examples is from “Happy Days.”

KAPLAN: Fonzie, in one episode got a library card and the next week, the number of Americans who applied for library cards increased by 500 percent.

Kaplan says that’s because we watch TV shows a lot differently than we watch commercials and other programming.

KAPLAN: When we are listening to a story, we’re kind of in a spell. We are more susceptible to ideas and emotions and content than when we are in our more rational times of the day.

HILL HARPER: As an actor, you feel like you’re giving back.

That’s Hill Harper, aka Doctor Sheldon Hawkes on “CSI: New York.” This week, instead of examining what’s in bodybags, he’ll try to keep people out of them by volunteering in a medical response unit.

HARPER: You know, people are Tivoing things and fast-forwarding through things, and aren’t always watching what comes on, whether it’s a PSA or whatever, but they are watching the show.

But will they keep watching? The Hollywood reporter’s Alex Ben Block says shows have to be careful with this kind of thing.

ALEX BEN BLOCK: You can’t go too far, because if you start becoming preachy, or if the show is sort of obviously a commercial for something, even a good cause, people get the remote, and they click and they’re gone onto another show.

To see all of our favorite TV characters do all of the horrible things we love to watch.

TV CLIP: Do you feel any remorse at all over that?