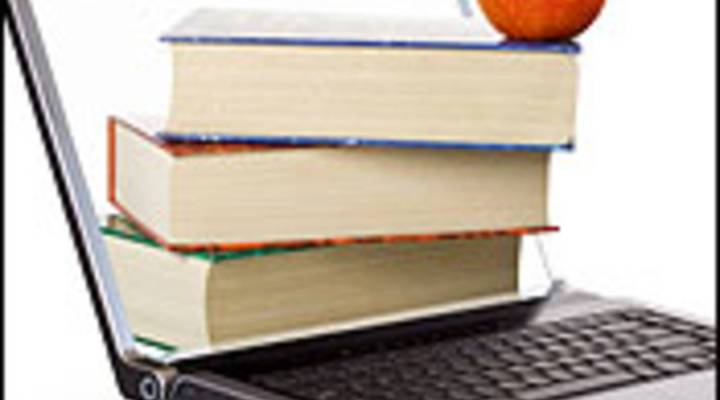 Are textbooks history in the digital era?

COPY
Books inside a laptop represent the concept of digital textbooks. iStockPhoto

Are textbooks history in the digital era?

Books inside a laptop represent the concept of digital textbooks. iStockPhoto
Listen Now

Kai Ryssdal: There is an unwelcome visitor in a lot of classrooms this fall. That would be the U.S. economy. States are cutting education spending to fill their budget holes. And in turn schools are cutting programs, bumping up class sizes, doing pretty much anything they can to cut costs.

One option that has started to get some attention is digital textbooks. They can go beyond just what is printed on the page. And they are a whole lot cheaper than those traditional hard-bound door stops that students have been carrying around for decades now. Marketplace’s Stacey Vanek-Smith reports.

BRIAN EVANS: We went through four of the five fundamental economic concepts, so let’s now do the final concept marginal analysis.

STACEY VANEK-SMITH: Brian Evans is an economics professor at Foothill College in Los Altos Hills, Calif. Today he’s teaching his students cost-benefit analysis, and he’s taking a chapter from real life: his decision to use digital textbooks in his class this year.

EVANS: Let’s think for a minute about the decision to go from a traditional textbook to the online book that we’re using. Because I was raised you’ve got to get as much as you can for your dollar.

Schools have been running some numbers of their own. Online textbooks usually cost about $20 per student. Compare that to $100-plus for a traditional textbook. Right now digital books are only about 2 percent of the textbook market. But they’re catching on fast at universities and now states are pushing them as a way for public schools to cut costs.

ARNOLD SCHWARZENEGGER: Starting this fall with high school math and science, we will be the first state in the nation to provide schools with a state-approved list of digital textbooks.

That would be California Governor Arnold Schwarzenegger. This summer, California launched a digital textbook initiative the governor says could save schools up to $400 million a year. Schools could negotiate prices. And kids who don’t have computers could use paper printouts provided by teachers. Textbooks are a $7 billion business in the U.S. So you might think all this talk of digital books would have publishers coming unglued.

The Chronicle of Higher Education’s Jeff Young says not quite.

JEFF YOUNG: The publishers do stand to gain here. Publishers have been trying since even the CD-ROM Era to do some sort of version of their electronic textbooks.

Online books are a lot cheaper to produce than textbooks — no glossy paper or pricey color pictures. So most of the money coming in from online books is profit. And the text itself is just the beginning. Students can buy supplements, like an audio version, a hard copy, study guides on DVD.

Sanford Forte is with Flatworld Knowledge, which specializes in digital textbooks.

SANFORD FORTE: We thought that if we would offer the students options at affordable prices, that they would buy something and in fact the vast majority of students are buying something from us.

More than half of the students in Professor Brian Evans’s economics class bought a hard copy of the textbook from the online publisher to use with the digital version. Evans says his students found online books a little clunky. Graphics sometimes don’t show up, it can be hard to jump from page to page, and you can’t take notes in the margin. Students have also complained it gets tiring to read off of a computer screen.

EVANS: So I don’t think it will ever replace the textbook totally, but I certainly think it’s going to grow. I think that they’re going to be able to start adding in videos or links within the textbook. They’ll get more and more interactive and just get better and better.

Publishers are busy making improvements. So students can highlight text, take notes in the margin online and share those notes with friends. The books will also offer practice tests that can instantly identify a student’s trouble spots and help them learn. And teachers can modify the books to fit their lesson plans.

EVANS: So what do you think? Is it worth it? Do the benefits outweigh the costs?

That’s in the eye of the reader, but as the technology improves, more budget-conscious schools and companies are starting to think outside of the book.