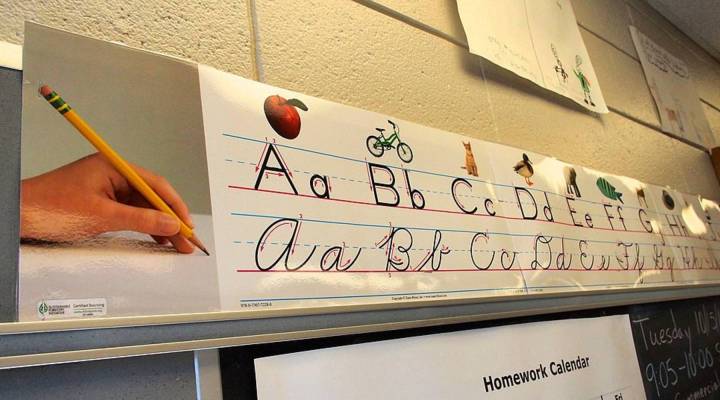 It’s been close to a decade since what is now known as the Great Recession started, at the end of 2007. But in many states, funding for public schools still hasn’t recovered. According to a new report from the Center on Budget and Policy Priorities, at least 23 states will provide less general funding for education this school year than they did in 2008.

Arizona is among the worst off. In 2014, its total education funding was almost 37 percent lower than just before the recession. The state is still cutting, as its budget has been squeezed by the weak recovery and ongoing tax cuts.

“Arizona, I think, has cut more from public education than just about any state since 2008,” said David Lujan, vice president for economic progress at Children’s Action Alliance, a Phoenix-based advocacy group.

The cuts have hurt basic services. Last year almost a third of the state’s school buses failed safety inspections, Lujan said. Teachers are using outdated textbooks and technology – if there is a teacher, that is.

“We had over 2,000 classrooms this school year that started without a qualified certified teacher, because school districts just are not able to retain or hire teachers,” he said.

Public schools get almost half of their funding from state governments. Most of the rest is local, mainly from property taxes. In wealthier districts that can make up for some shortfalls in state funding, but in Arizona, Alabama, Colorado and 17 other states, local funding has been shrinking, too.

“My fear is that in these states that have cut so deeply, we’re going to see reduced outcomes for kids in those states,” saidMichael Leachman, co-author of the report.

Funding doesn’t always determine the quality of a school, Leachman said, but it can make a big difference — especially for kids from low-income families. A recent study found that poor children who went to schools that got a permanent 10 percent increase in funding were much more likely to finish high school and earned more as adults.