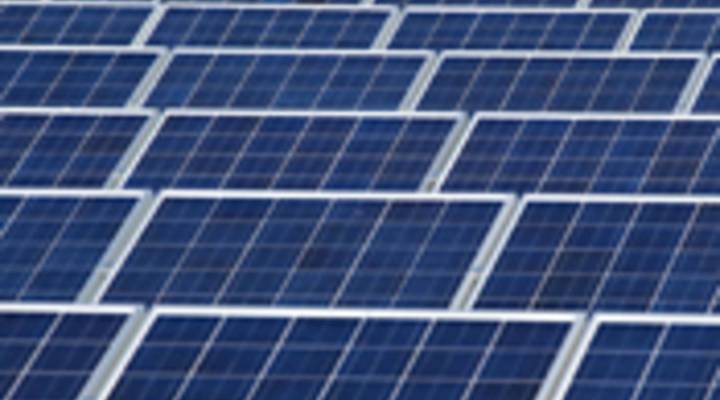 COPY
A technician checks the panels of a solar power system on the roof of solar power company in Frankfurt, Germany. Michael Urban/AFP/Getty Images

A technician checks the panels of a solar power system on the roof of solar power company in Frankfurt, Germany. Michael Urban/AFP/Getty Images
Listen Now

Bill Radke: A lot of politicians are talking up renewable energy. Today, a House committee is considering new investments in solar power. Stacey Vanek-Smith has more.

Stacey Vanek-Smith: States like Vermont, California and Hawaii are already offering incentives to consumers and businesses to develop solar energy. But Toby Couture, who follows energy markets, says federal investment is needed to accelerate growth in the industry.

Toby Couture: Currently solar energy is significantly costlier than electricity provided from other sources. So finding ways to bridge that cost gap, it has really been the major stumbling block.

To lower that cost, Couture says the U.S. needs to offer low-interest loans and tax breaks and invest in new infrastructure for solar power.

Arno Harris is the CEO of Recurrent Energy. He says with a growing supply of solar panels and other equipment, now is the time to act:

Arno Harris: The U.S. is just sort of getting its policies all harmonized and we think we’re going to start to see a volume of projects here in the U.S. that will, you know, bring the U.S. into a real leadership position.

Today’s hearing is part of a larger effort to hammer out a plan to boost renewable energy and cut carbon emissions ahead of global climate negotiations in December.

So you’re ready to install solar