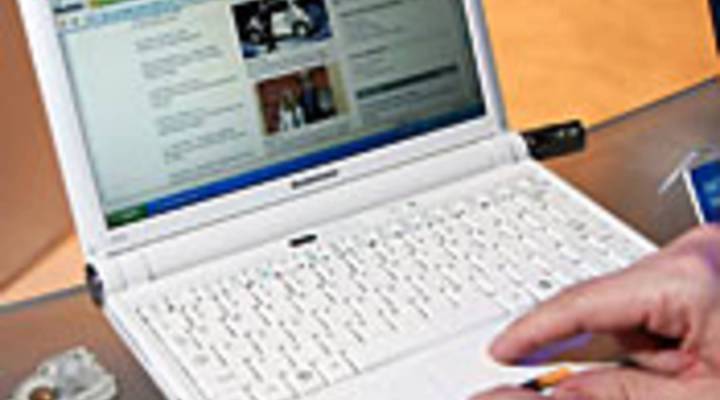 Tess Vigeland: One item more and more school kids are expected to have and use is a laptop computer. Sounds financially onerous for many families, but these days you don’t have to spend the GDP of Swaziland to buy one.

Today Hewlett Packard reported second-quarter earnings of $1.6 billion, 67 cents a share. The company’s netbooks get some of the credit. Netbooks are mini laptops, originally conceived of as cheap computers that could be used in the developing world.

Marketplace’s Stacey Vanek-Smith tells us their new popularity here at home could spell big changes for the computer industry.

STACEY VANEK-SMITH: A netbook is kind of like a laptop-light. They’re about the size of a sheet of paper and roughly half an inch thick. They’re not very powerful. You use them for the basics: e-mailing, surfing the Web, writing a paper. In other words, what most of us use a computer for. The price: $200 – $300.

ROGER KAY: The value proposition for a netbook is so simple that if you were doing an elevator pitch, you could get it off between the first floor and the second floor. Basically, it’s something that you know for cheap.

Netbook sales have more than doubled over the last year. They now make up one of every five laptops sold. And that’s caught the computer industry by surprise. Because no one expected consumers would want a slower, less powerful machine. After all, the whole PC industry was built around selling the newer, faster, more powerful machine.

Power’s not an issue for Jeff Jennings, even though he runs the technical operations for Freewire, a company that builds fan sites for celebrities. He bought an HP netbook a couple months ago, and he says thanks to cloud computing, the little netbook and an Internet connection are all he needs to do his job.

JEFF JENNINGS: I can literally sit on my boat on the weekends and if there’s a problem, I fire up my netbook. I hop on a server in Germany, per se, help diagnose the problem, or fix the problem and get it back up and running.

The price and portability of netbooks has transformed the computer business, says Bob O’Donnell, a tech analyst with IDC.

Telecom companies are heavily promoting netbooks, too, because they can sell wireless plans for them. That’s got the computer industry worried about the future — that customers may decide they no longer need a $1,200 laptop with all the trimmings, and can make do with a cheap computer and an expensive phone.