Steve Chiotakis: The Secretary of Housing and Urban Development, Shaun Donovan, speaks
this morning in Washington. He delivers/delivered the keynote address at a national conference on homelessness.
Now the issue’s taken on greater significance in this recession. People are losing their jobs and their homes at a rate that has sent homelessness to near record highs. One city having a particularly hard time dealing with
its swelling homeless population is New York, as Marketplace’s Jeremy Hobson reports.

Jeremy Hobson: Nothing’s cheap in New York. Certainly not housing. And the temporary apartments used to accommodate the homeless are nearly full.

Robert Hess is the commissioner of the City’s Department of Homeless Services:

Robert Hess: We’re seeing applicants for shelter increase about 30 percent more this year than last year at the same time.

So city officials this week put some tough new policies in place. They make it easier to eject people from shelters for minor infractions like staying out past curfew.

Hess: We do not view shelter as a home. We view shelter as short-term, temporary and emergency services to help stabilize families that are in crisis with all the dignity and respect that they deserve.

Dignity and respect aren’t the first words that come to mind at the city’s main homeless intake center. It’s in the South Bronx, one of New York’s poorest and most dangerous neighborhoods. Hundreds of families file in the door in search of shelter — and some come right back out again after being found ineligible for housing.

Marisol: They tell me I have to come back after 12:00 in the morning to apply for overnight. Come on, I have two kids, you know? They shouldn’t be doing that.

That’s a woman who called herself only Marisol. She says authorities told her to stay with her aunt, Gina. But Gina says she’s got no room.

Gina: I got like 10 people in my house right now. I’m supposed to fit, what, five more? Four more? No, no, I got my own family.

This drama in the South Bronx may sound worlds away, but homelessness is up all over the country.

Professor Dennis Culhane studies the issue at the University of Pennsylvania. He says even if we’re at the beginning of a recovery, homeless levels could still be on the rise for some time.

Dennis Culhane: This recession could sort of blow a hole in the safety net, and the homeless system that is out there is simply not sufficient in its capacity to deal with the potential problem.

New York’s taken an out-of-sight, out-of-mind approach to save on long-term shelter for the homeless. The city is now buying one-way tickets to places where homeless families have relatives or friends who’ll take them in. 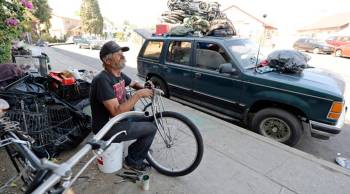