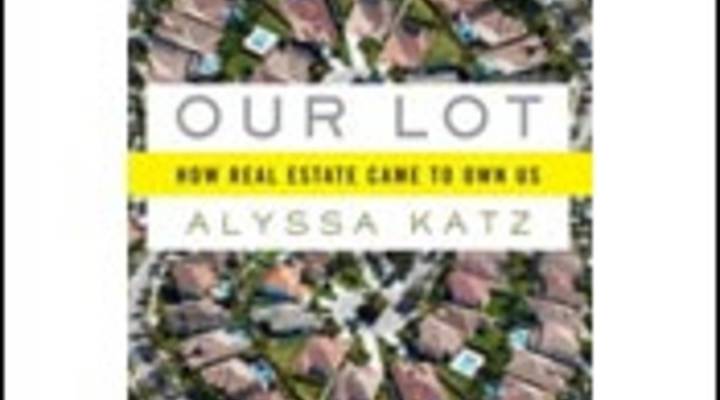 COPY
Cover of "Our Lot: How Real Estate Came to Own Us" AlyssaKatz.com
Fallout: The Financial Crisis

Cover of "Our Lot: How Real Estate Came to Own Us" AlyssaKatz.com
Listen Now

Tess Vigeland: We Americans have carried around a lot of assumptions about real estate: That buying a home is always a good investment, that home prices only go up.

Here’s the reality check: foreclosures soared by almost 15 percent in the first half of this year. So where did those assumptions begin?

Alyssa Katz has a few answers in her new book “Our Lot: How Real Estate Came to Own Us.”

I asked her what went wrong with the American Dream of everyone owning a home.

Alyssa Katz: I think what went wrong is that home ownership ended up becoming a political tool. In the middle of the Great Depression, the Roosevelt administration created the Federal Housing Administration, which insured home mortgages and extended those mortgages to 30 years. So that a borrower could pay off this debt slowly over time, which really opened up home ownership to millions of people, who otherwise could never have achieved it.

Vigeland: So when did we start thinking of it in different terms?

Katz: Going forward into the 60s, 70s, 80s and 90s, because those federal programs haven’t been available by and large to black home buyers, to Latino home buyers, because of various discriminatory policies, this kind of became a political opportunity to say, “Let’s finish this unfulfilled dream and bring home ownership to all.”

Vigeland: And then that really paired with people all of a sudden looking around, seeing all of their neighbors and friends buy homes. It was almost like you were entitled to own your own home.

Katz: Well, absolutely. This happened through a combination of very, very well-intentioned programs and policies. The problem would come in when people would be able to eye their refinance with a subprime or other, less well-constructed mortgage. Or in recent years, find opportunities to simply buy homes with no money down, stated income and so on. Many many lenders had programs that would deliberately target first-time home buyers. Countrywide, in particular, was a pioneer in this, seeking what they would call “new market borrowers,” who previously wouldn’t have been able to get a home mortgage.

Vigeland: Have you seen any change in the winds in terms of this notion that we should all be owning homes?

Katz: There are really two stories going on here. In Washington, it’s all about preserving near universal home ownership as a goal. With the markets in crisis and current owners unable to sell, just making sure there’s a supply of buyers there to keep the market afloat is really essential. So we have things like the first-time home buyer tax credit.

I think among the American public, there’s a lot more ambivalence. Because there’s been just an enormous shift in a sense of what home ownership represents, having gone from a way to build wealth and security to something that has stolen that security from so many people.

Vigeland: Do you own your own home?

Katz: I do, reluctantly.

Katz: Well, I grew up in New York City. And New York City is a city of renters. My apartment lost its protections under rent regulations. I had been a renter and suddenly I found that my building was turning into a condominium. And the developer of this condo was offering apartments that we had rented for $600,000, $700,000, $800,000 and that it simply wasn’t a commitment that I, individually, and my family weren’t prepared to make.

So we did end up buying, but buying elsewhere. But it was really out of a quest for security, wanting to raise a family, knowing that we wouldn’t get kicked out at the end of the year. And that was ultimately what made us make the decision to buy.

Vigeland: You think you’d ever go back to renting?

Katz: I don’t know. I’m starting to like home ownership.

Vigeland: Well, there you go. I think that is probably the primary argument for home ownership, is that it’s really nice. You get to do your own stuff with your own place.

Katz: It is. I mean, if we borrowed much less than the cost of our apartment and really made sure it fit within our budget. And I think that’s so critical here. Back in the 1930s, the typical home that those new borrowers were buying cost maybe two or three times that family’s annual income. Now it’s very difficult to find a place that’s within a family’s budget.

Vigeland: Alyssa Katz is the author of “Our Lot: How Real Estate Came to Own Us.” Thanks so much for your time.