How to get your goat

How to get your goat

Like all car companies, Mitsubishi is staying up nights trying to figure out how to actually sell cars. In New Zealand, Mitsubishi has come up with this: Buy a Triton truck, get a lawnmower for free. And by lawnmower, I mean a goat.

Why a goat? From the Sydney Morning Herald:

The company’s New Zealand general sales and marketing manager Peter Wilkins said the economy’s recovery was in rural hands. (Goats), like Tritons, he said, were “hardy, versatile units which will integrate directly into existing farm operations.”

They also improved farm productivity by defending against weeds, were cheaper than toxic sprays, and there was no risk of goat flu affecting the tourism industry, he said.

The incentive only applies to one model — the Triton ute. A ute? What’s a ute? Where’s Joe Pesci when you need him…

Anyway, for Kiwis not interested in getting their goat, Mitsubishi is offering a non-goat option that includes an extended warranty and roadside assistance. There’s no word on whether American carmakers will respond with their own livestock incentives.

Sir, this one comes with anti-lock horns

Smaller than an SUV, but still a weed guzzler 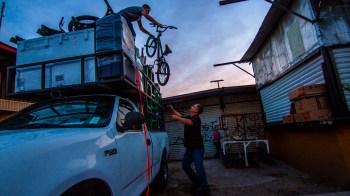