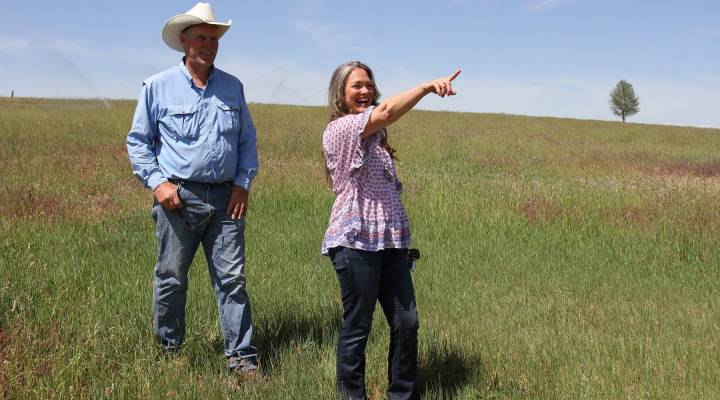 COPY
Farmer Christina Carpenter gestures toward one of the fields that will host campers during August’s total solar eclipse. She and Grant Putnam (left) are taking advantage of the rare opportunity to host an eclipse festival on their farm, Organic Earthly Delights.  Amanda Peacher/for Marketplace

Farmer Christina Carpenter gestures toward one of the fields that will host campers during August’s total solar eclipse. She and Grant Putnam (left) are taking advantage of the rare opportunity to host an eclipse festival on their farm, Organic Earthly Delights.  Amanda Peacher/for Marketplace
Listen Now

For two minutes on August 21, the moon will completely block the sun during a rare total solar eclipse. From Oregon to South Carolina, communities in the 70-mile beltline where the eclipse will be most visible, will be jammed with spectators.

Astronomers predict that some of the best viewing will be in central Oregon, because of the clean, high desert air and typically clear skies. That has farming and ranching communities in the region gearing up for a mini celestial boom.

Rancher Grant Putnam and his partner, Christina Carpenter, own a cattle operation and farm called Organic Earthly Delights in the town of Madras, Ore. Come August, their fields will be covered with tents, cars and solar eclipse watchers. The farmers are putting on a four-day festival where they hope to host up to 500 eclipse spectators.

Madras is expected to swell from 6,200 people to more than 70,000 for the eclipse. Motels booked up two years ago, so farmers started selling campsites in their fields.

This is a big investment for  the owners of Organic Earthly Delights. They need to pay for port-a-potties, permits, trash cans and insurance. On top of food and music, they’re bringing in astronomers, beekeepers and equestrians to give talks on the farm. They’ll charge about $500 a head for four days of camping, meals, and activities.

At first some residents of this little farm town were nervous about this huge influx of outsiders.

With so many people talking about Madras, residents figured they might as well make the most of it. They’re hoping some of those visitors will fall in love with their community, that maybe a few will even move there and start a business.

“This is opportunity,” Vattimo said. She sees the eclipse as a way for her community to grow.

Overall the city is spending about $100,000 on her salary and other preparations.

“There’s a lot of things that can go wrong when there’s 70,000 people on the ground at one time,” Vattimo said, pointing out that city officials worry about traffic jams, medical emergencies and wildfires.

Across Oregon there are estimates of up to a million visitors flooding the state for the eclipse.

“It’s definitely a once in a lifetime thing for us,” said Angie Ludi, who just opened a clothing and gift boutique called The White Buffalo in downtown Madras.

She’s stocked up on solar eclipse souvenirs like t-shirts, paperweights, and necklaces — not to mention space-themed bath products.

“They’re actually called bath bombs,” Ludi said. “And for the solar eclipse, I’m actually going to be carrying the galaxy bomb, too, and it has a little alien in the middle.”

Ludi was initially nervous about opening an upscale boutique in a small farming community. But the prospect of thousands of eclipse tourists coming into her shop gave her more confidence.

“Starting a business now, I feel like it kind of gave me that extra push that I needed to go ahead and do it,” Ludi said.

Back at Organic Earthly Delights farm, Christina Carpenter and Grant Putnam moved their goat herd to a fresh pasture. The goats bleated happily as they tore into the tall grass.

Carpenter is even incorporating the goats into the farm’s eclipse festival. Visitors will be able to watch how they react when the sun disappears.

“The animals will be here and kind of be a circus act,” Carpenter said, laughing. “I hate to say that, but in a healthy sort of way.”

“We want to expand into you know, pasture poultry and turkeys and chickens,” Putnam said. “We’d like to do some of those other things, so it would really allow us that opportunity.”

So far, they’ve booked about 275 campers — enough to break even. They know this is a rare economic opportunity.  There won’t be another total solar eclipse crossing Oregon until the year 2169.