Bill Radke: When you’re a teenager just starting to write songs, it’s hard to imagine one day you WILL be older than your music’s copyright protections. It happens. Baby boomer musicians in Europe got some good news this week when the European Union Parliament voted to extend recording copyrights from 50 years to 70. Christopher Werth reports.

Christopher Werth: The move is a victory for icons of the British invasion. The copyright on recordings like the Beatles hit “Love Me Do” would expire in three years under existing law. But Paul McCartney would still receive some royalties because he not only performed the 1962 hit, he also wrote it.

The work of a writer or composer is protected for a lifetime, plus 70 years after death. But as Jonathan Radcliffe of Nabarro explains, there are a lot of people in the music industry that don’t have that extra income:

Jonathan Radcliffe: The kinds of rights that are falling out of protection from the 50’s and 60’s were performed by people who at that time typically didn’t usually write the music and the lyrics. They simply performed them.

That leaves aging British rockers like Cliff Richard in a tough position. He became a star with hit singles he didn’t actually write, like 1959’s “Living Doll.” The song’s copyright expires this year.

Richard was among those who campaigned hard for the changes that will ensure those royalty checks keep showing up. But critics say the move will do more for record companies to continue raking in profits on old contracts. 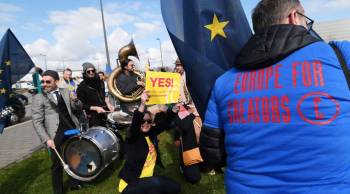