Renita Jablonski: How about paying taxes for transportation projects based on how many miles you drive? A bi-partisan panel releases findings today of a two-year study into ways to make up for highway funding shortfalls. This study comes from The National Surface Transportation Infrastructure Financing Commission. Now that’s a long name. Right now, gas taxes pay for roads and bridges, but as Sarah Gardner reports, experts say it’s not enough.

Sarah Gardner: The commission says the U.S. is spending only a third of what’s necessary to keep up our roads. Gas taxes, it says, aren’t a good way to fund them, especially now that cars are getting more fuel efficient.

Geoffrey Yarema: The gas tax was a reasonable proxy for use. It isn’t any longer. So this is the next evolution of a user pays concept for transportation.

Oregon has already piloted this idea. It’s commonly called a VMT tax — vehicle miles traveled. Every car would have a GPS-like mileage counter in it to track how far the driver’s gone and possibly where.

Transportation Secretary Ray LaHood floated the idea this month, but the White House immediately rejected it. The commission will also recommend states consider more toll roads and congestion pricing where people pay a premium to drive during rush hour. 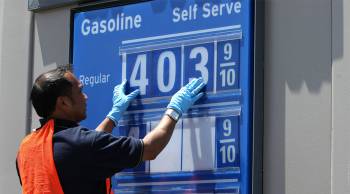 How is it that gas prices can be so different block to block?