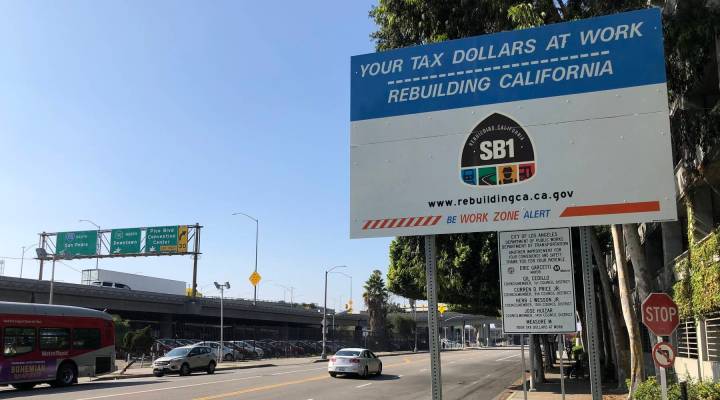 One thing that both sides of the political divide agree on is that the nation’s infrastructure is in bad shape. Our roads are especially rough, meriting a grade of D from the American Society of Civil Engineers.

Typically, funding to maintain and improve streets comes from gas taxes. California is one of several states that have recently increased those taxes in an effort to boost funding for repairs. Last year, California legislators decided to raise the state’s 18 cents per gallon tax on gasoline to 30 cents per gallon.

Almost immediately, a group formed to put forward Proposition 6 to overturn the increase and require that all future hikes be approved by voters, rather than legislators.

“The politicians have more than enough money to fix the roads,” said Carl DeMaio, chairman of the Yes on Prop 6 campaign. “They just keep diverting the money. So we don’t need to add the cost of living burdens to working families to fix roads. They should be putting the existing gas tax into roads rather than increasing it.”

Proponents for SB-1, the recently passed gas tax, say it is vital if California is going to make badly needed repairs.

“We have this backlog of $130 billion in infrastructure investment in our roads and bridges, and that means we have roads that are less safe, bridges that are less safe,” said Eli Lipmen, director of development and programming at Move LA. “We aren’t investing in the state in the way that we need to.”

Lipmen stood last Thursday at the corner of Venice Boulevard and Figueroa Street in Downtown Los Angeles. He pointed out the mosaic of cracks in the pavement and potholes that fill Venice Boulevard. He said upcoming repairs that will be partially paid for by SB-1 are necessary to smooth out a busy bus route.

“The whole ride is one chatterbox,” Lipmen said. “You’re bumping along. If you’re having a conversation, if you’re making a phone call, if you’re reading something on the bus, you can’t really do that when you’re just bouncing along the whole way.”

Proponents of increased gas taxes say they haven’t been keeping up with demands. For one thing, the per-gallon taxes aren’t indexed to inflation.

But another reason could be seen directly across the corner from where Lipmen was standing — a Honda dealership, where window signage advertised hybrids and other fuel-efficient cars.

Kris Siguare, a salesmen at the dealership, said good gas mileage is a primary concern for most prospective buyers.

“Out of 10 customers, nine customers are coming for gas efficiency,” Siguare said. “Of course they’re looking for saving gas.” And they’re finding it. Some vehicles top out at over 50 miles to the gallon. That means fewer gallons of gasoline are sold and the state collects less tax revenue.

“Before, people maybe had to buy, you know, five gallons of gas to go 100 miles,” said Asha Weinstein Agrawal, who researches transportation finance at San Jose State University. “Now, maybe they’ve got to buy four gallons of gas, and as a result they’re paying less in gas taxes than they were previously.”

Agrawal’s research group — which is partially funded by the gas tax increase — estimated that if voters overturn it by approving Prop 6, the state will have $4 to $5 billion less to spend on road repairs every year. And she said that gap is likely to grow because of the rise of electric vehicles.

“Starting maybe 10 years from now, we will need to seriously think about transferring from gas taxes to something else — perhaps a mileage fee,” Agrawal said.

Lipmen said the new gas tax is already on its way to making life better for California drivers.

“There are 6,500 projects that are currently underway in the state of California because of the money that’s coming in from the gasoline tax, and those are projects that weren’t happening a year and a half ago,” Lipmen said.

But not everyone sees that. A few blocks away, Mario Reyes was gassing up his white SUV.

He said he’d probably be in favor of overturning the gas tax increase, but he wasn’t sure he was going to vote at all.