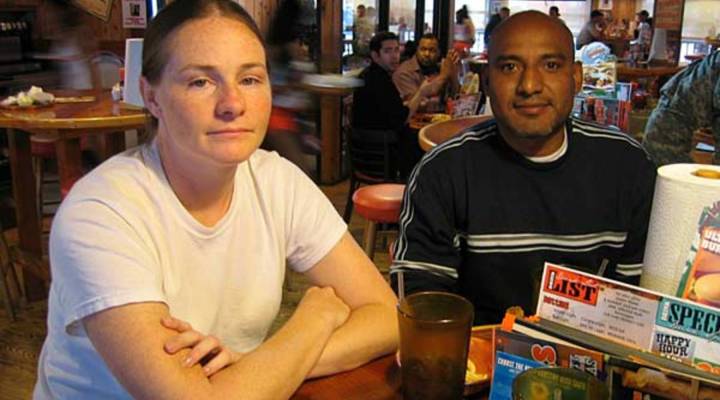 Injured, but still stickin’ with the Army

Injured, but still stickin’ with the Army

Tess Vigeland: On our way from Dallas to Fort Hood, we stopped at a local Hooters. The restaurant had donated wings, fries and drinks for about two dozen wounded soldiers. Patrick ended up buying lunch for 56 more service members scattered throughout the restaurant. And after the meal he handed out $5,000-worth of tickets to Dallas Stars hockey games, courtesy of team captain Brenden Morrow.

One of the recipients was a young woman in a plain, white T-shirt and jeans. She sat down next to me, and I noticed a long scar running down her left forearm.

Her name is Angel Herrera, and she’s an Army sergeant, 30 years old. She drove trucks for an engineering unit in Afghanistan until an incident last September ended her tour of duty.

Angel Herrera: We were woken up in the middle of the night, the night before we were supposed to leave. And the night person that was on watch came in, woke everybody up and said that we had confirmed incoming and to grab gear and get in the bunkers.

The mortars started hitting, and when I stepped through I looked up, and I saw a . . . it looked like a gigantic football on fire, coming at me. And it was confirmed later as a RPG, which is a rocket-propelled grenade.

It hit me in the abdomen, and I took shrapnel to my left forearm and to my neck, where it severed my jugular. I have numerous internal injuries to include my liver, my spleen, my stomach, my intestines, my lungs. And I still have shrapnel left inside also.

Vigeland: You’ve made the decision that you want to stay in the Army, if they’ll let you. Why?

Herrera: The fact that I got hurt, for me . . . I could walk across the street and get hit by a bus. I just happened to catch the RPG. Most people don’t understand about the military. It’s another job, just like any other job. Except for, you have the bonus of a deployment. A lot of people don’t like it. I do. I enjoy doing my job. I think it’s an honor and a privilege to be in the military, and hopefully they’ll allow me to stay.

Vigeland: You came into the military fairly late, at age 26?

Vigeland: What did you do before that? What was your career path?

Herrera: I was a cook for about eight years.

Vigeland: Given what has happened to you, what’s attractive about staying with the Army, versus returning to civilian life?

Herrera: It’s a steady paycheck. You never have to worry about not getting paid. When you’re not deployed you have every holiday off imaginable. I get to spend it with my family. I’ve had Christmases with my kids that in previous years I didn’t get to have because I had to go to work, especially in the profession that I was in as a cook. I was paying almost $800 a month for insurance just for my children. In the military I can take them to the doctor any time they need it. The military pays the whole thing. The other thing is, with the economy the way it is right now, most people are losing their jobs. I’m not going to lose my job.

Vigeland: Well, thank you so much. It’s been a pleasure talking with you.

VIGELAND: That was Army Sgt. Angel Herrera at an event for wounded soldiers just outside Fort Hood, Texas, last month. And we’ve given her the final word in this week’s Marketplace Money special on personal finance in the military.