Tess Vigeland: Alarmed by the plummeting price of oil, OPEC ministers today announced a record cut in future output — 2.2-million barrels per day beginning January 1st. That, coupled with a production cut announced earlier this fall means producers will be pumping nearly 4.5 percent less oil than a year ago. Even so, prices on world markets hit four-year lows today. John Dimsdale explains why.

John Dimsdale: OPEC’s target price for a barrel of crude is $75. Today you could get a barrel for just over 40 bucks. Even though the production cut is the largest in its history, OPEC, for now at least, has lost control over the price of oil, says Deloitte analyst Joseph Stanislaw.

More evidence today that demand will continue to drop: the Energy Department reported oil and gasoline reserves in the U.S. are up over the past week. And then there’s market skepticism that OPEC members are disciplined enough to stick with their production cuts.

Fareed Mohamedi: You know, Rome was burning in a sense while OPEC was fiddling. Now it’s going to take a little bit of convincing to turn it around and show that OPEC is serious and the market will be watching very carefully if new quotas are met.

And if OPEC cuts production too much, they risk starving the world economy into a steeper downturn. Not enough and the oversupply will keep their commodity cheap and bring less profit. For now falling oil prices are giving the Federal Reserve the inflation protection it needs to keep interest rates near zero. 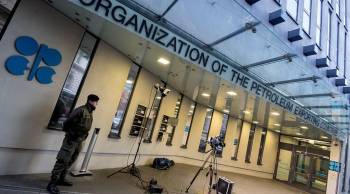