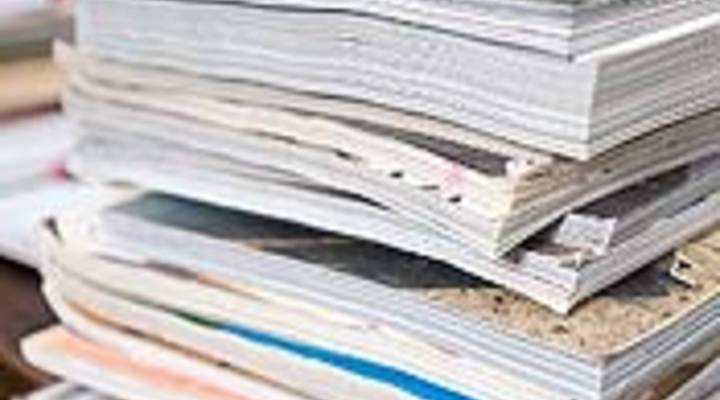 COPY
A stack of catalogs Courtesy of Gov Gab blog

TESS VIGELAND: They were able to beat off the recession for a while, but high-end retailers are starting to feel it. Today Mastercard reports that sales of luxury goods dropped nearly 35 percent in the first week of December, compared to the same week last year.

Even for those shoppers who can still afford to splurge, flaunting your buying power is out. These days it’s better to keep things behind closed doors. At least that what’s some retailers are hoping for.

STACEY VANEK-SMITH: Every night I come home to a mailbox choked with catalogs — Saks, Dolce & Gabbana, Tiffany’s . . . even the epic Neiman Marcus Christmas book. Who do these retailers think lives in my apartment? Does Neiman’s really expect me to drop $1,700 on a pair of Christian LeBoutin fringe boots? That’s more than my rent.

And these catalogs are glossy and gorgeous and cost a lot to produce. Why would retailers spend so much to barrage people like me with luxuries we can’t afford? Here’s Milton Pedraza, CEO of the Luxury Institute.

Milton Pedraza: Direct mail, as messy and clunky and wasteful as it is, still works extremely well. And there’s a great interaction between a catalog and the Internet.

And nobody has to know you’ve been shopping. Perfect for the new inconspicuous consumer like investment banker Robin Harris. Her Madison Avenue office is in the heart of New York’s luxury shopping district. But these days her buying sprees sound like this: [sound of typing]

Robin Harris: People used to have bag envy, if you walked down the street and saw a woman carrying tons of designer bags. Now it’s way too showy. And so for packages to come discreetly to your door at home is much better than coming back into the office after lunch with three or four bags.

Better for bottom lines, too. Luxury sales are down by more than a third this year, but online luxury buys are up. And it’s not all about shopping on the down-low. Plunging property values and stock portfolios have even the wealthiest consumers looking for deals.

Lynn Franco is a consumer economist at the Conference Board.

Harris: I am logging on.

Investment banker Robin Harris is a member of Ideeli — an invitation-only shopping site, where members can buy designer goods at big discounts. CEO Paul Hurley says sales are climbing 30 percent a month. And he says street-shy shoppers aren’t the only ones trying to be inconspicuous. Luxury retailers don’t want to risk hurting their brands by discounting in public.

Paul Hurley: The deals are behind a wall. It means that not everybody’s going to see that. And that’s a big, big portion of this.

It’s also a chance for designers to try the Internet on for size. Sites for Prada, Gucci and Fendi are slick but limited. Only about a third of luxury retailers actually sell their stuff online.

MILTON PEDRAZA: It’s not just, you know, another channel anymore. And the Internet, I think, will become probably the most important channel for many luxury brands.

So maybe those fancy catalogs I’m getting aren’t such a waste. When the economy gets a little better and I actually have a couple extra grand, I am so buying those Christan Leboutin boots.