Your opinions, from the Big 3 to TARP

Your opinions, from the Big 3 to TARP

Kai Ryssdal:
Lots of you have had thoughts about our coverage of the auto industry the past couple of weeks, so I figure we’ll start there.

The Big 3 are in limbo about what kind of help they might get, if any. Congress is going to hear Detroit’s pleas to avoid bankruptcy once again after Thanksgiving.

HoePhua Ng: They can wipe out all legacy problems and start with a clean slate. This should make them more competitve and hopefully more agile.

Martin Sager of Ann Arbor, Michigan, not to far from Detroit, says that even though Detroit CEOs didn’t make a good case while they were in Washington, what they really do need is time.

Martin Sager: The auto industry saw the writing on the wall and started retooling a couple of years ago to become much leaner. We need to give them a chance to complete that transformation and start bringing those new products to market.

Speaking of products and markets, a couple of weeks ago we brought you a story about buyer’s remorse. People buying something and then turning around and taking it right back after they realize they can’t afford it.

Craig Ward’s a bicycle retailer in Sterling, New Jersey. He says serial returners ought to think about cost before they buy.

Craig Ward: Those who shop for thrill cost retailers something that can’t be recovered — our time.

Last week our series Working profiled a miner in the Congo.
A lot of you wrote to say that that story was a great example of what a global economy means to people outside this country.

Andrew Jacknain from Washington D.C. said the story touched him for a different reason.

On that theme of family, Jose Velez of Dallas, Texas, wrote in response to our report last week — the one that said some financial business that aren’t banks are trying to become banks so they can get their hands on bailout money. He says taxpayers could learn a thing or two.

Jose Velez: Why don’t struggling American families start applying for bank status so that they can get some bailout money too.

Finally this week, Scott Swink from Los Gatos, California, wrote with this: He says he’s tired of hearing about the Troubled Asset Relief Program or TARP. With all the changes in the way that plan’s being carried out by Treasury Secretary Henry Paulson, the name needs to change too.

Think about it for a second. All right. 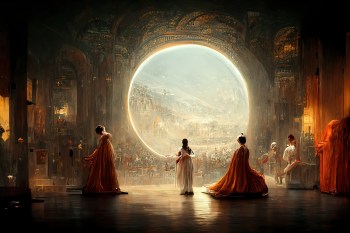