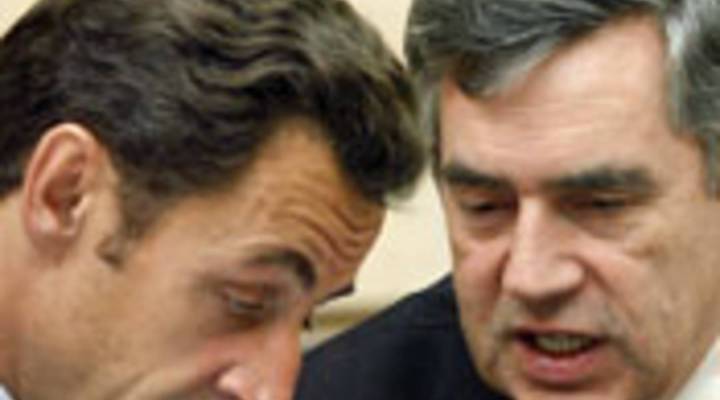 Kai Ryssdal: After a weekend’s worth of meetings, France, England, Germany and some other European countries have unveiled their fix for what ails the credit markets. Cash, cash, and more cash pumped directly into banks. And the markets finally found a rescue they could love. Marketplace’s Stacey Vanek Smith has more on the European Plan.

Stacey Vanek-Smith: The British government pledged $63 billion. France $480 billion. Germany took the cake with $670 billion. Such vast sums of money are almost old hat these days, but the overwhelmingly positive reaction from the markets was new.

Julian Callow: I would say that we have turned the corner here, yes.

Julian Callow is Chief European Economist for Barclay’s Capital. He says Europe’s united effort was key to restoring confidence in the markets.

Callow: If it’s just one country going it alone or a couple of countries, the markets are going to think that isn’t going to be sufficient. But when you have most of the G7, I think that really does send a very powerful signal.

The government plans are all variations on the same theme: Getting money to banks in every possible way and taking the risks out of intra-bank transactions. That means guaranteeing loans between banks, insuring deposits and buying up big chunks of stock in financial institutions. Wharton School economist Ken Thomas says this is the only way to turn things around.

Ken Thomas: The real problem here is loss of confidence. We rebuild confidence by having such a huge amount of money in the trillions, on a global basis, that we are basically saying: the banks are too big to fail, we’re going to back them all up.

Thomas says unlike past plans, things like lowering interest rates and bailing out individual companies, this strategy gets at the heart of the problem. He says it will probably take years to recover from the financial crisis, but in general we are on the right track.