Scott Jagow: As part of our special coverage of the financial crisis, we’re hitting the road. We’ve dispatched two Marketplace reporters on a trip across America.

We begin in Charlotte, North Carolina, where Amy Scott is standing by. Amy, I used to live in Charlotte, so I know it’s all about the financial industry. Bank of America and Wachovia both headquartered there. What’s your sense of the city right now?

Amy Scott: Well, when Citigroup stepped up to buy Wachovia’s banking business earlier this week, it really hit Charlotte hard. The bank employs about 20,000 people here, and though no lay-offs have been announced, thousands are expected. And just to get a sense of how that could affect really the whole economy here, I visited a hair salon right across the street from one of Wachovia’s many towers here in Charlotte.

Yvonne Curtis: Probably about 50 percent of my clients are Wachovia people. I was up all night last night thinking about it, ’cause it’s really been kind of sad around here.

That’s Yvonne Curtis, a hair stylist at Gene’s Master Cuts. Her boss, Gene Buchan, said he’s feels like he’s been down this road before:

Gene Buchan: Cause I’ve been doing bankers ever sine 1973, so I’ve been through these times before. I’ve had to rebuild several times.

Buckin says he’s been cutting hair in this neighborhood so long, he feels like he works for Wachovia. So he was taking this pretty hard.

Jagow: And Amy, what about the gas shortage we’ve been hearing about in that area?

Scott: Right, well Charlotte and much of the southeast are in the midst of a gas shortage that’s been going on close to three weeks now, after Hurricanes Ike and Gustav took out several refineries. I met people who are really suffering from this, some guys who had to take off a day without pay because there wasn’t enough gas to drive their van, a car salesman who said he’s had to send customers home with vouchers to come back and fill up their new cars at another time. I’m told the situation is improving, but people are still having to drive around looking for gas, wait in long lines and often pay a lot more.

Jagow: Well, I hope you make it to your next stop.

Jagow: All right, Amy Scott in Charlotte. Thanks.

Scott: Thanks a lot. 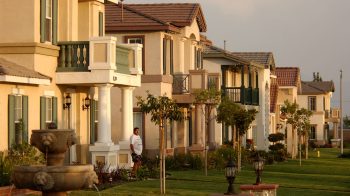