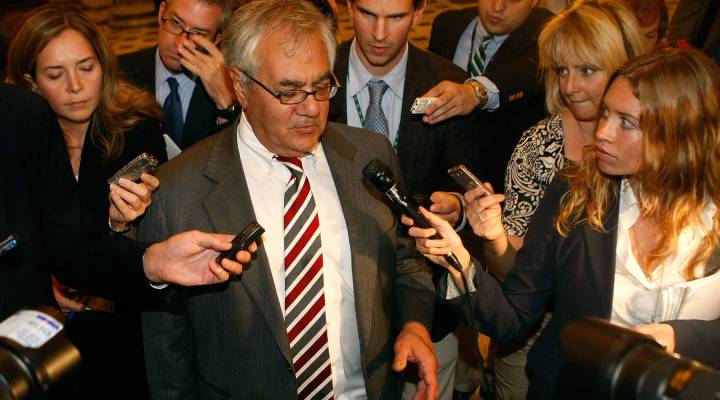 What happened? And what’s next?

What happened? And what’s next?

Kai Ryssdal: “Now what?” is a fair question to be asking at this point. And we will do just that with two people voted no on the plan that failed today. We’ll try to figure out why Henry Paulson couldn’t carry the day. And forget about a 777-point loss on the Dow. We will introduce you to the really scary part of the market — short-term credit.

The final vote in the House today was 205 yeas; 228 nays. Despite pleas from both Speaker Nancy Pelosi and the minority leader John Boehner, there were significant numbers of no votes from both sides of the aisle. What we’re going to do for the next couple of minutes is try to figure out why. We spoke earlier today with Congresswoman Marilyn Musgrave. She’s a Republican from Colorado, the eastern part of the state, and she was in the “no” majority today.

Marilyn Musgrave: Sure we should look at Wall Street and help them work their way out of this problem, but not at the expense of the taxpayer. The taxpayers shouldn’t have to bail them out.

Ryssdal: There were more Democrats voting no today than Republicans, more than would be suggested even by the majority that the Democrats enjoy. One of those no votes came from Representative Peter DeFazio. He’s a Democrat from Oregon. Congressman, good to have you with us.

Ryssdal: What was it about this bill you didn’t much care for?

DeFazio: Well, I thought the whole premise on which it was based was false, but somehow if the taxpayers borrowed $700 billion and took a bunch of bad debts from Wall Street, that this would bring about liquidity and then ultimately would somehow filter down help Main Street, help housing, help the basic economy. But beyond that, we’ve heard from William Isaacs, head of the FDIC. He ran it during the last, previous greatest financial crisis in the history of America, savings and loan, and he said a couple of simple steps could deal with the bank liquidity issue.

So I think there are practical proposals out there that just weren’t heard. And in addition to that, Paulson didn’t at all get, in my mind, to the underlying part of the economy — the problems in housing and the declining housing market. There are credible economists who said: Hey, if you don’t deal with housing, you may be taking care of this week’s bad securities, but guess what? Next week, if housing goes down another 5 percent, there’s gonna be a whole batch more bad securities out there. You’ve gotta deal with the underlying problems in housing and the underlying problems in the economy.

DeFazio: No, that would be nowhere near enough, because the whole precipice, or you know, foundation on which this thing was built was faulty; again in my mind, borrowing the money and throwing it at the top.

Ryssdal: What do we do now?

DeFazio: I think we all take a deep breath. Bush could, between tonight and tomorrow morning, implement the regulatory changes proposed by Mr. Isaacs. I’m working with Lloyd Doggett from Texas. We’re actually drafting legislation that would do that if the President wouldn’t do that. We just need to make clear that we intend to take action. This isn’t the far right of the Republican Party saying we need to do nothing. There is a, you know, we can put together a majority of the House just on the Democratic side with a good proposal, and I think there’s a number of Republicans who’d come along with a better proposal. This one was not a good proposal.

Ryssdal: Do you think Speaker Pelosi made a mistake bringing this one to the floor?

DeFazio: Look, you know, they were handed a really bad starting point. They shouldn’t have accepted the premise. Henry Paulson sent down a three-page insult to Congress, saying: You let me either borrow or give me $700 billion — authorization to print it — and you get out of the way. That was what he sent down. People said, oh, he’s just a tough bargainer. And I said no, that is not a bargaining position, plus I reject the basic premise. We should have put his plan up for a vote on Tuesday last week. It would have gotten zero votes, then we would have been in the negotiating position to push him back. They then started negotiating with him, and, you know, you just can’t get very far starting from a failed premise.

Ryssdal: Do you reject the reject the administration’s premise that the credit markets are still frozen?

DeFazio: There are apparently problems in the big money parts of the credit market, not yet locally. My credit union’s community banks are still lending. They’ve all, I’ve been in touch with them. They did say there’s a new phenomena where some businesses locally were very solvent are having their credit lines cut off by commercial banks under orders from the FDIC. So the FDIC has to stop making things worse and start thinking about how they can regulate to make things better.

DeFazio: Hasn’t stopped ringing. We’re getting up over 3,000 phone calls, over 3,000 e-mails running well more than 100-to-1 against it, but that’s not what I based my opinions on. I was the first member of the House of Representatives to speak out against this plan last Monday morning.

Ryssdal: Do you think both sides of the leadership misjudged that anger?

DeFazio: Absolutely, and, I think, they were in a rush to pass this before people went home and heard it.

Ryssdal: Peter DeFazio, Democrat of Oregon. Congressman, thanks for your time.